Import cargo volume at the nation’s major retail container ports is expected to rise an unusually high 16.9 percent this month over the same time last year as West Coast ports begin to dig out from a backlog of cargo that built up during just-concluded contract negotiations with dockworkers, according to the monthly Global Port Tracker report released today by the National Retail Federation and Hackett Associates.

“The contract talks are over, but the tentative agreement still has to be ratified and it’s going to take months to get back to normal on the West Coast,” NRF Vice President for Supply Chain and Customs Policy Jonathan Gold said. “Retailers’ immediate priority is to make sure spring merchandise reaches store shelves in time. Going forward, we want labor, management and Washington to work together to see that we never again have a situation like what we went through these past several months.” 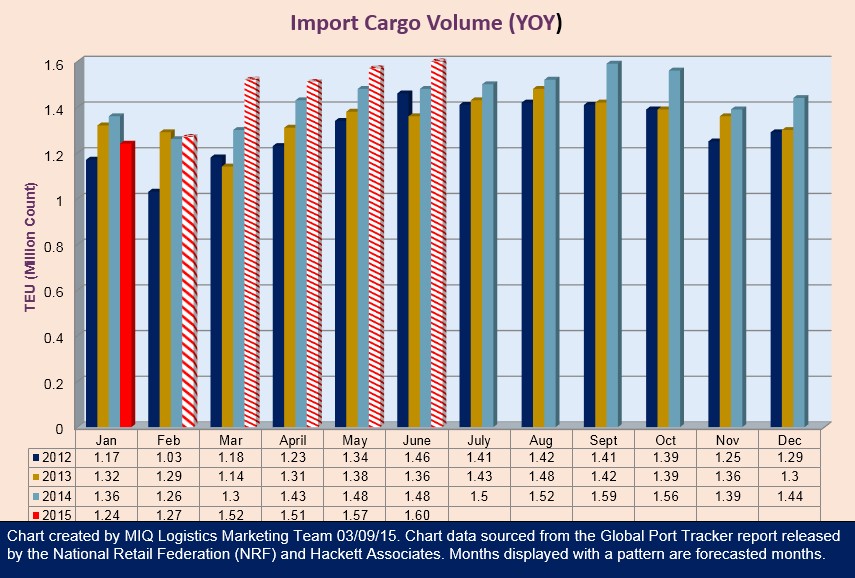 Following negotiations that began last spring, the contract between the Pacific Maritime Association and the International Longshore and Warehouse Union expired on July 1. Despite ongoing talks, the lack of a contract and other operational issues led to crisis-level congestion at the ports, and retailers and other businesses asked President Obama in December to encourage the use of a federal mediator. A mediator joined the talks in January but a tentative agreement was not reached until February 20, after Labor Secretary Tom Perez sat down to personally broker a deal.

Ports covered by Global Port Tracker handled 1.24 million Twenty-Foot Equivalent Units in January, the latest month for which after-the-fact numbers are available. That was down 13.4 percent from December following the end of the holiday season and down 9.5 percent from January 2014. One TEU is one 20-foot-long cargo container or its equivalent.

The first half of 2015 is forecast at 8.7 million TEU, an increase of 4.5 percent over the same period last year.

“Importers and exporters are reviewing their supply chain plans for the future, and not necessarily in favor of the West Coast,” Hackett Associates Founder Ben Hackett said. “Looking on the practical side, a number of factors favor a return to the West Coast.”