Imports Up As Retailers Look Toward Holiday Season

Import cargo volume at the nation’s major retail container ports is expected to increase 3.6 percent this month over the same time last year as retailers begin to bring in merchandise for the holiday season, according to the monthly Global Port Tracker report released today by the National Retail Federation and Hackett Associates. Imports for the year are expected to be up 4.2 percent over 2014. 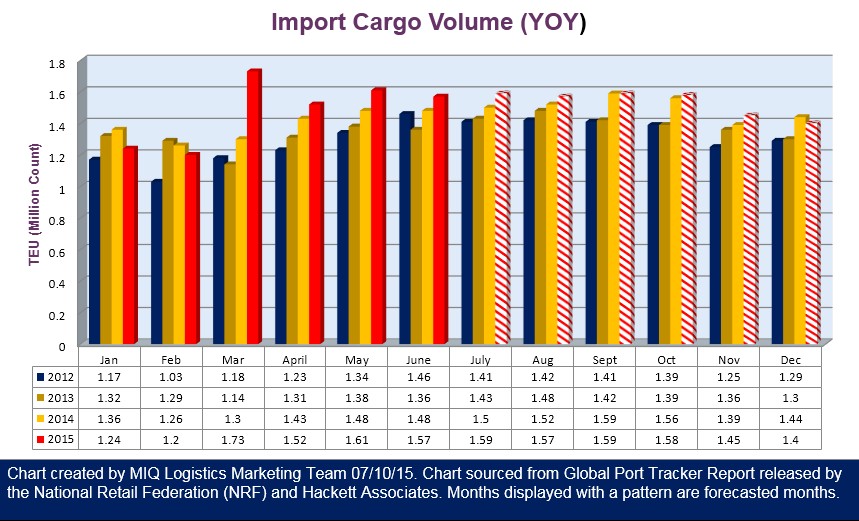 “Consumers might be out buying back-to-school supplies but toys and sweaters are starting to show up on the docks,” NRF Vice President for Supply Chain and Customs Policy Jonathan Gold said. “There are still some lingering congestion issues but retailers are working with their supply chain partners to make sure all of that merchandise flows smoothly to store shelves.”

Ports covered by Global Port Tracker handled 1.57 million Twenty-Foot Equivalent Units in June, the latest month for which after-the-fact numbers are available. That was down 2.5 percent from an unusually busy May but up 6.2 percent from June 2014. One TEU is one 20-foot-long cargo container or its equivalent.

Some retailers are paying less to transport their merchandise this year, thanks to the use of more large-capacity ships by ocean carriers. Hackett Associates Founder Ben Hackett said the increased capacity has driven down rates, but the relief could be short-lived because some lines have already canceled voyages to counteract the trend.

“We are seeing complete chaos on the high seas in terms of the amount of capacity available and the level of spot freight rates,” Hackett said. “One has to wonder why carriers cannot match supply to demand. The end result will likely be a highly volatile situation of freight rates moving up and down.”