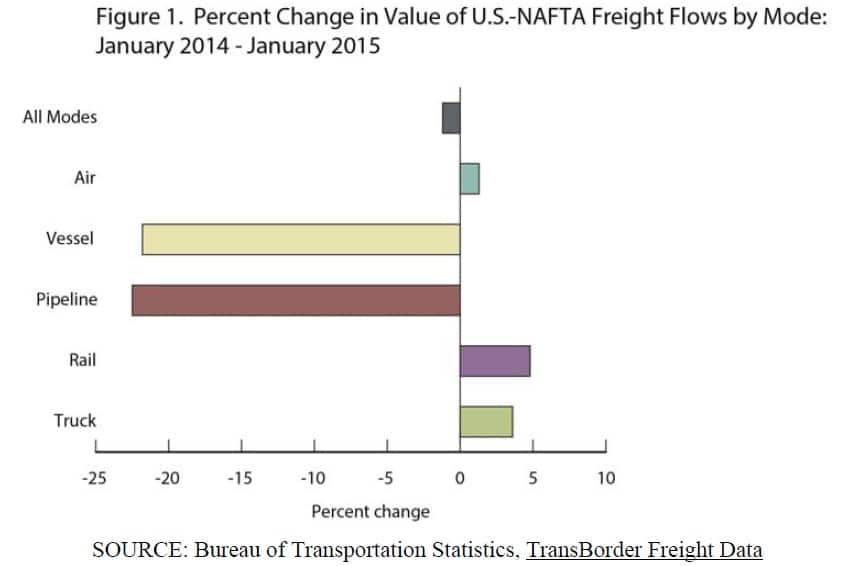 In January 2015 compared to January 2014, the value of commodities moving by rail grew by the largest percentage of any mode, 4.8 percent. Truck freight increased by 3.6 percent and air rose by 1.3 percent. Vessel freight decreased by 21.8 percent and pipeline freight decreased by 22.5 percent mainly due to lower unit price of mineral fuel shipments. Trucks carried 62.3 percent of U.S.-NAFTA freight and are the most heavily utilized mode for moving goods to and from both U.S.-NAFTA partners. Trucks accounted for $27.4 billion of the $47.5 billion of imports (57.7 percent) and $28.2 billion of the $41.8 billion of exports (67.6 percent). Rail remained the second largest mode, moving 14.5 percent of all U.S.-NAFTA freight, followed by vessel, 7.8 percent; pipeline, 6.6 percent; and air, 3.9 percent. The surface transportation modes of truck, rail and pipeline carried 83.4 percent of the total U.S.-NAFTA freight flows.