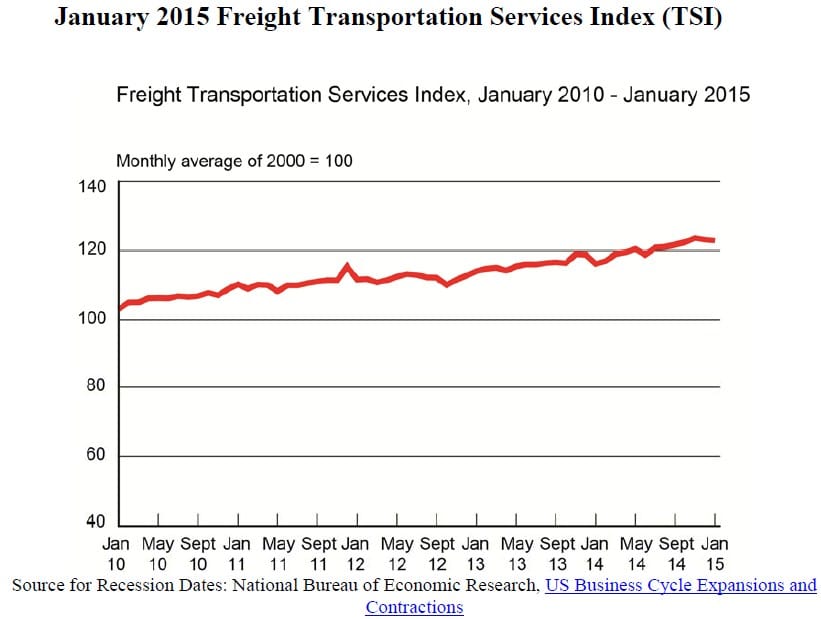 The level of freight shipments in January measured by the Freight TSI (122.9) was 0.6 percent below the all-time high level of 123.6 in November 2014 (Table 2A). BTS’ TSI records begin in 2000. The November and December indexes were revised down from last month’s release. November was revised from 123.9 to 123.6 while December was revised from 123.8 to 123.1. There were smaller downward revisions for August through October.

Analysis: Rail carloads, rail intermodal, and pipeline grew in January but air freight, trucking and waterborne decreased, resulting in the continuing decline in the overall freight index. Institute for Supply Management data indicated that growth in production, orders, and inventory slowed in January.

Trend: The Freight TSI declined in January for the second consecutive month. It was down 0.6 percent from its all-time high in November after increases for five consecutive months. Even after two months of declines, the index remained higher than it had been at any point prior to the November high. After dipping to 94.6 in April 2009, the index rose 29.9 percent in the succeeding 69 months. For additional historical data, go to TSI data.