“May’s increase in the LEI, the fourth consecutive one, was broad based,” said Ataman Ozyildirim, Economist at The Conference Board. “Housing permits held the index back slightly but the LEI still points to an expanding economy and its pace may even pick up in the second half of the year.”

“Recent data suggest the economy is finally moving up from a 2 percent growth trend to a more robust expansion,” said Ken Goldstein, Economist at The Conference Board. “The CEI shows the pace of economic activity continued to gain traction in May, while the trend in the LEI remains positive. Going forward, the biggest challenge is to sustain the rise in income growth which will drive consumption.” 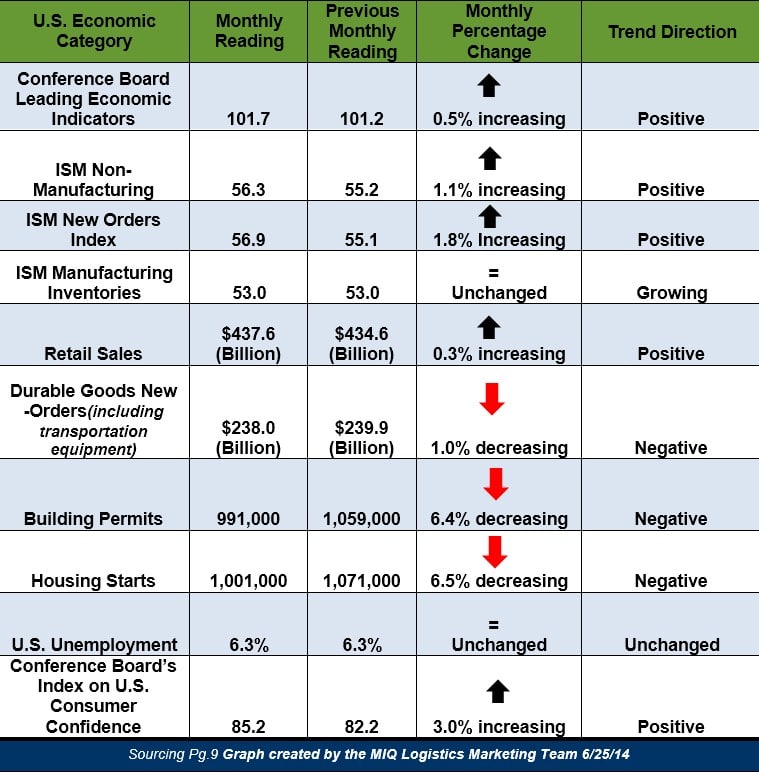 Economic activity in May shows that the manufacturing sector grew for the 12th consecutive month:

No industry reported contraction in May. 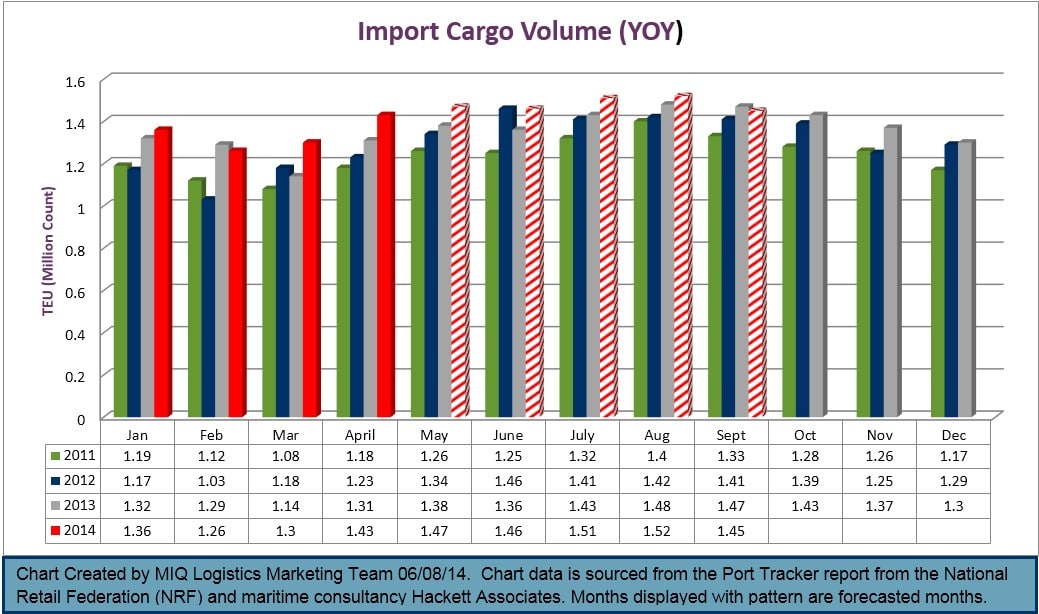 The 6/15/14 Peak Season Surcharge (PSS) was postponed until 7/01/14. The announced levels from the carriers are listed below.

Two Key Trade Bills unlikely to be brought up for a vote in Congress until the lame duck session after the November 4 mid-term elections.

National Association of Manufacturers together with other manufacturing groups lobbied Congress on June 17 hoping to spur movement on the stalled miscellaneous tariff bill (MTB).

The primary purpose of such bills is to help U.S. manufacturers compete at home and abroad by temporarily suspending or reducing duties on intermediate products or materials that are not made domestically, or where there is no domestic opposition. Such reductions or suspensions reduce costs for U.S. businesses and ultimately increase the competitiveness of their products.

The bill has faced objections from Senate Republicans, who say that it constitutes an earmark, a characterization which House Republicans and Democrats dispute.

Renewal of the Generalized System of Preferences (GSP) is also caught up in Washington Gridlock Politics.  GSP is a program providing non-reciprocal concessions under which the US permits duty-free or low-duty entry to imports from selected developing countries up to a certain limit.   Statutory authority for the GSP program expired on July 31, 2013 requiring importers to pay the higher column 1 (normal trade relations) rate of duty until Congress renews the program.

The GSP bill faces a problem over what funds will be used to offset the cost of eliminating tariffs on covered products, largely due to opposition by Sen. Tom Coburn (R-OK).

Additionally, there is no sense of when GSP is renewed, whether it will be retroactive, as in the past.  CBP issued a release on June 9 that explains, assuming that the goods were properly classified and appraised, the entry summaries must be liquidated as scheduled and noted that “CBP does not have the legal authority to further extend liquidation pending possible renewal of GSP.”

In follow up to MIQ’s Trade Alert of May 27, 2014; the PMA / ILWU the current labor contract is set to expire on June 30, 2014.  No one expects a renewed contract agreement prior to June 30.  It is important to note that from the beginning of the contract talks on May 12, 2014, BOTH sides have said that they are committed to reaching an agreement without any labor disruption.  So unified have they been on this message, when there was a rumor that the talks had broken down on June 4, 2014 a joint press release was immediately issued reaffirming their mutual commitment to working through an agreement without any labor disruptions.

Although no one can predict with 100% certainty what will happen in the future, all signs continue to indicate any imminent strike or lockout is unlikely on the US West Coast.  Small and limited disruptions (at one or two terminals, for one or two 8 hours shifts) may occur.  That being said the contract talks in conjunction with other seasonal factors are currently causing congestion and delays of three to four days in LA/LB ports.

These delays will likely grow in the next week as the National July 4th holiday and the ILWU no work holiday of July 5th (Bloody Thursday) contribute to the current delays, culminating during week #28.  Most continue to believe that the ILWU / PMA will reach a formal agreement in week #29 or 30.