“The LEI rose for the third consecutive month, driven largely by improving housing and financial market conditions,” said Ataman Ozyildirim, Economist at The Conference Board. “This latest report suggests the economy will continue to expand, and may even pick up steam through the second half of the year.”  “Despite a brutal winter which brought the economy to a halt, the overall trend in the leading economic index has remained positive,” said Ken Goldstein, Economist at The Conference Board. “If consumers continue to spend, and businesses pick up the pace of investment, the industrial core of the economy will benefit and GDP growth could move closer towards the 3 percent range.” 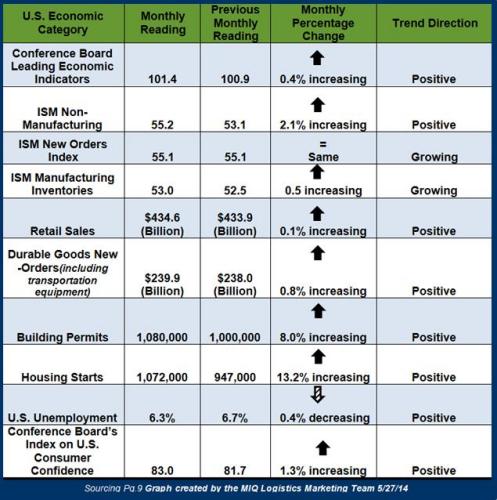 Economic activity in the manufacturing sector continued to climb in April 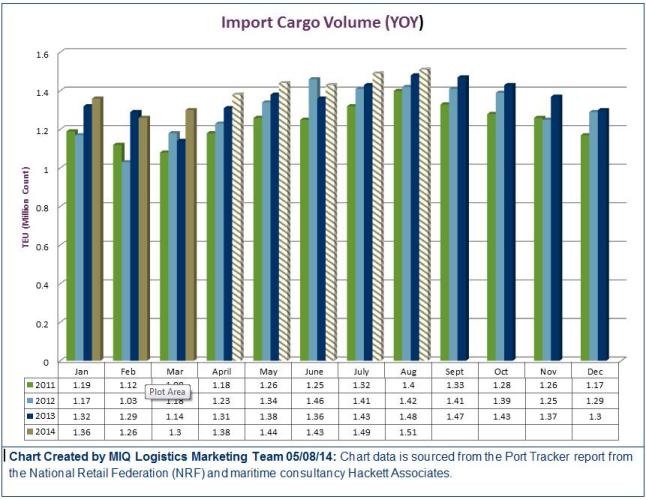 The 5/1/14 GRI was postponed until 5/15/14, however it went through at mitigated levels. The original announced levels from the carriers are listed above. 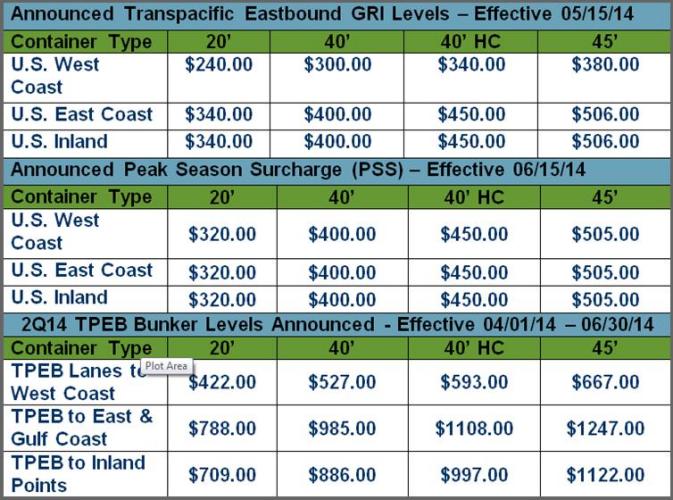 1.       Import Customs Violations: US Court of Appeals for the Federal Circuit (CAFC) in the case of Trek Leather Inc. et al. v. United States, will rehear the Government’s contention that Corporate Officers and Shareholders can be held personally liable for customs violations.  The CAFC’s decision will substantially affect CBP’s enforcement posture for years to come.  In the interim, Corporate Importers may wish to consider providing indemnification agreements to Directors, Officers and Key Employees to minimize potential personal liability for actions taken in their corporate capacity that result in customs violations. Read more here.

2.       C-TPAT Container Seals Requirement: Effective May 15, 2014, a previously announced seal requirement will be required for securing the door locks of ocean shipping containers for C-TPAT participants. The standards for these new seals were established by the International Organization for Standardization (ISO) under protocol 17712. Read more here.

3.   The long-expired Generalized System of Preferences (GSP) may get a boost toward renewal driven by the push from the administration and Congress to support Ukraine at a time of crisis.  Several key US lawmakers are conferring with the White House to discuss reviving the lapsed Generalized System of Preferences (GSP) program in an effort to aid Ukraine. GSP, which expired on July 31, 2013, promotes economic growth in developing countries by providing duty-free entry for up to 5,000 products from 123 countries.  Legislation that would have extended the program before its expiration failed to clear the Senate Finance Committee last July when Sen. Tom Coburn (R-OK) objected to the pay-for provision of the bill.  Congress is working on an additional aid package for Ukraine, and there has been talk of renewing GSP benefits – for Ukraine and other eligible countries – in connection with that effort.  The Senate Finance Committee, which deals with trade issues, is reportedly discussing renewing the program, which lawmakers let expire at the end of last July after failing to find a way to pay for its extension. In the course of his appearance before the Ways and Means hearing on the President’s trade policy agenda (see above, related article), U.S. Trade Representative Michael Froman said that renewal of the Generalized System of Preferences program “would benefit Ukraine immediately.”  Read more here.

May 12 the PMA (the negotiating body for the west coast marine terminal operators) and the ILWU (the west coast longshore union) began 2014 contract negotiations in San Francisco.  Each side has laid out their starting demands most of which will either be settled quickly or completely dismissed depending on merit by both parties.  The ILWU indicated that they want a two year contract while the PMA prefers a six year contract but have indicated they could concede to a minimum contract term of no less than three years.

The ILWU wants to maintain their current healthcare benefits however the “Cadillac tax” under Obamacare triggers an annual payment of $190 million on these benefits which neither side wants to absorb.  In addition the union is seeking increases in: pension benefits; assessment payments based on tonnage; hourly pay of $5.50 in year one and year two of the contract; an additional no work holiday; two additional vacation days each year; increased penalties to employers on violations of jurisdiction, coupled with a pay guarantee of 50 hours per week for Class A and 40 hours per week for Class B ILWU members.

The PMA is negotiating to reduce health care costs so to avoid the annual $190 million “Cadillac tax”, impose financial penalties to the union for failure to follow existing jurisdiction rulings while limiting the expansion of the ILWU’s claims for jurisdiction on jobs related to technology,  chassis repair, and the like. They are also pushing for increased productivity by increasing the work day to 9 hours from the current of 8 hours.

From the initial posturing, this could be a contentious contract negotiation and the lead negotiators from both sides predict that there will be no contract signed by expiration of the current contract on June 30, but both also expect a settlement by the middle of July.  Relatively minor (one or two shift) labor disruptions could occur, but neither side anticipates anything similar to the effects of the 2002 lockout.