Imports at the nation’s major retail container ports have set another new record, reaching 2 million containers in a single month for the first time as retailers continued to bring merchandise into the country ahead of a now-postponed increase in tariffs on goods from China, according to the monthly Global Port Tracker report released today by the National Retail Federation and Hackett Associates.

“President Trump has declared a temporary truce in the trade war, but these imports came in before that announcement was made,” NRF Vice President for Supply Chain and Customs Policy Jonathan Gold said. “We hope that the temporary stand-down becomes permanent, but in the meantime there has been a rush to bring merchandise in before existing tariffs go up or new ones can be imposed. China’s abuses of trade policy need to be addressed, but tariffs that drive up prices for American families and costs for U.S. businesses are not the answer.” 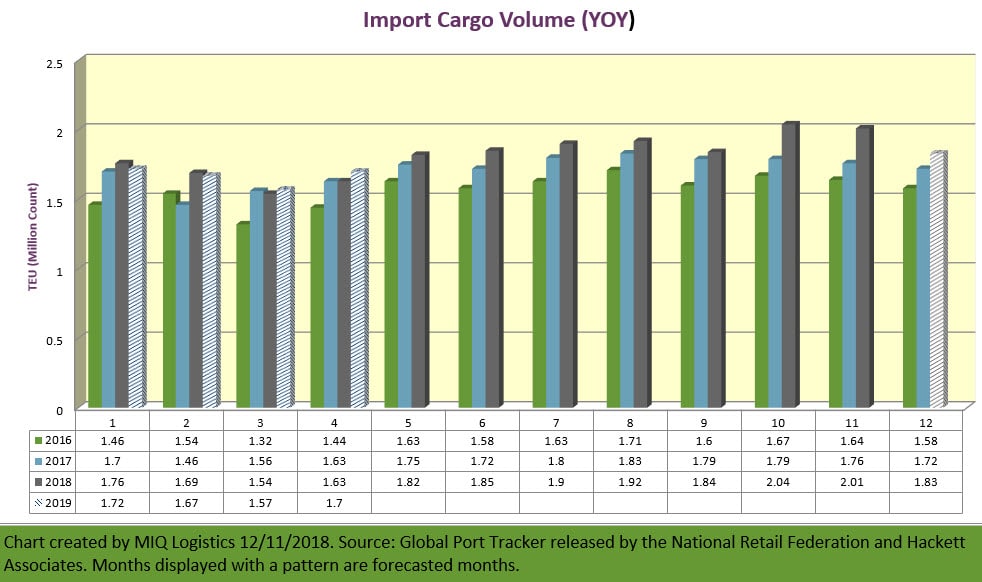 U.S. ports covered by Global Port Tracker handled 2.04 million Twenty-Foot Equivalent Units in October, the latest month for which after-the-fact numbers are available. That was up 9 percent from September and up 13.6 percent year-over-year. A TEU is one 20-foot-long cargo container or its equivalent.

November was estimated at 2.01 million TEU, a 14 percent year-over-year increase that would have been a new record if not for the October number. December – normally a slow month with holiday merchandise already on the shelves – is forecast at 1.83 million TEU, up 6.1 percent year-over year. Those numbers would bring 2018 to a total of 21.8 million TEU, an increase of 6.5 percent over last year’s record 20.5 million TEU.

Both year-over-year growth rates and total volume are expected to slow considerably in January, when 10 percent tariffs on $200 billion worth of Chinese products that took effect in September had been scheduled to increase to 25 percent. Trump announced last weekend after a meeting with Chinese President Xi that the increase – and a threat to impose tariffs on all Chinese products – would be put on hold while the two countries conduct 90 days of negotiations. Official action to delay the tariff increase has yet to be announced, however.

“We see a significant slowdown in import growth in 2019 as the market adjusts to higher prices due to the Trump tariffs and the impact on consumer and industry confidence going forward,” Hackett Associates Founder Ben Hackett said. “We project that imports at our monitored ports will have grown significantly in 2018 but that there will be no import growth in the first half of 2019 compared with the same period in 2018.”

While cargo numbers do not correlate directly with sales, the imports are also being driven by this year’s strong retail sales. NRF has forecast that 2018 holiday season retail sales – excluding automobiles, restaurants and gasoline stations – will increase between 4.3 percent and 4.8 percent over last year. Retail sales for all of 2018 are forecast to be up at least 4.5 percent over 2017.