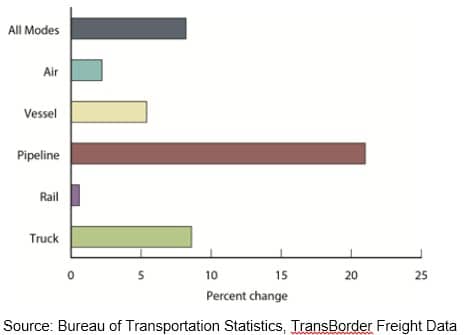 In September, the value of commodities moving by pipeline grew by the largest percentage of any mode, 21.0 percent. Truck freight increased 8.6 percent followed by vessel, 5.4 percent; air, 2.2 percent; and rail, 0.6 percent.

Of the $7.8 billion increase in the value of US-NAFTA freight from September 2013, truck freight contributed the most, $4.9 billion, followed by pipeline, $1.4 billion.

Trucks carry three-fifths of U.S.-NAFTA freight and are the most heavily utilized mode for moving goods to and from both U.S.-NAFTA partners. Trucks accounted for $31.2 billion of exports and $30.1 billion of imports.

>> Click here to read the entire press release from the Bureau of Transportation Statistics.