Imports at the nation’s major retail container ports are expected to be at near-record levels this spring and summer as consumer demand and supply chain challenges continue to result in congestion, according to the monthly Global Port Tracker report released today by the National Retail Federation and Hackett Associates. 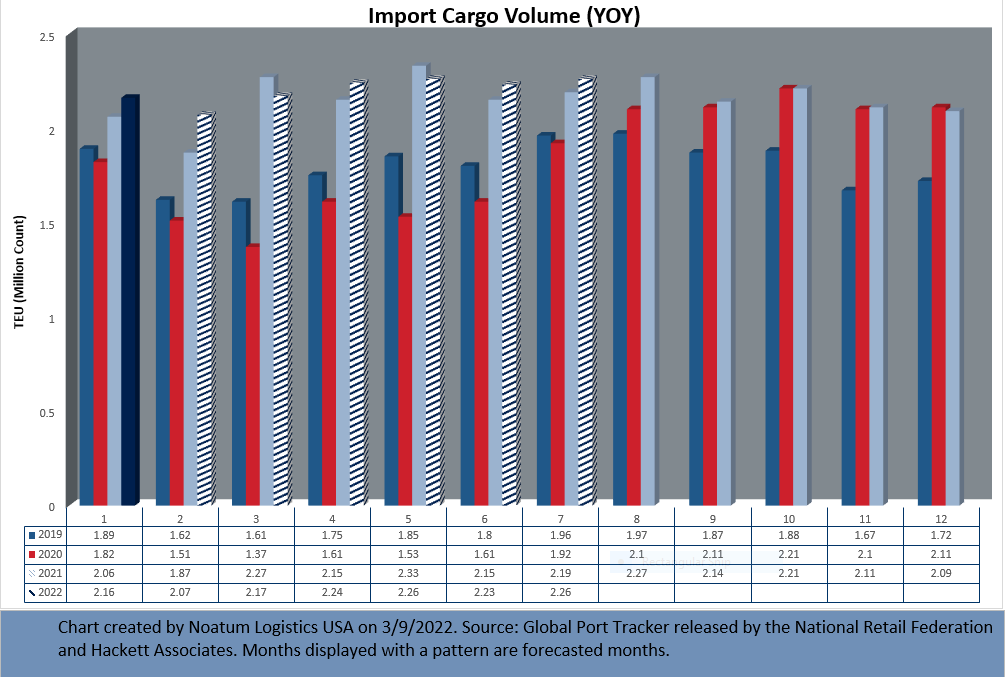 “Consumers are still spending and the supply chain is still working to keep up,” NRF Vice President for Supply Chain and Customs Policy Jonathan Gold said. “Growth rates have slowed down from the off-the-charts numbers we saw last year, but volume is close to the highest we’ve ever seen. Everyone in the supply chain is trying to reduce congestion, but there is still work to be done. Retailers are also planning for potential additional disruptions this summer from West Coast port labor contract negotiations.”

NRF recently sent a letter urging the International Longshore and Warehouse Union and the Pacific Maritime Association to begin contract negotiations well before their July 1 contract expiration to avoid any delay in reaching a settlement and additional congestion that might result.

“Congestion continues on both coasts, with ships queuing for berths at multiple ports,” Hackett Associates Founder Ben Hackett said. “Problems remain with clearing import containers to their inland destinations while export containers are still being held back due to lack of space at the terminals. Until supply chain problems are sorted out with more drivers, trucks and inland storage space, we do not expect to see a rapid decline in the backlogs being experienced.”

U.S. ports covered by Global Port Tracker handled 2.16 million Twenty-Foot Equivalent Units – one 20-foot container or its equivalent – in January, the latest month for which final numbers are available. That was up 3.6 percent from December and up 5.2 percent year-over-year.

Many of those monthly totals will come close to the record of 2.33 million TEU that was set in May 2021, which was up more than 50 percent year-over-year because of the shutdown of stores and overseas factories in the spring of 2020.