Imports at the nations’ major retail container ports are expected to dip slightly this month, but that’s the result of annual Asian factory shutdowns for Lunar New Year rather than new tariffs on steel and aluminum imposed this week, according to the monthly Global Port Tracker report released today by the National Retail Federation and Hackett Associates. Nonetheless, those and other tariffs could eventually have an impact on the ports. 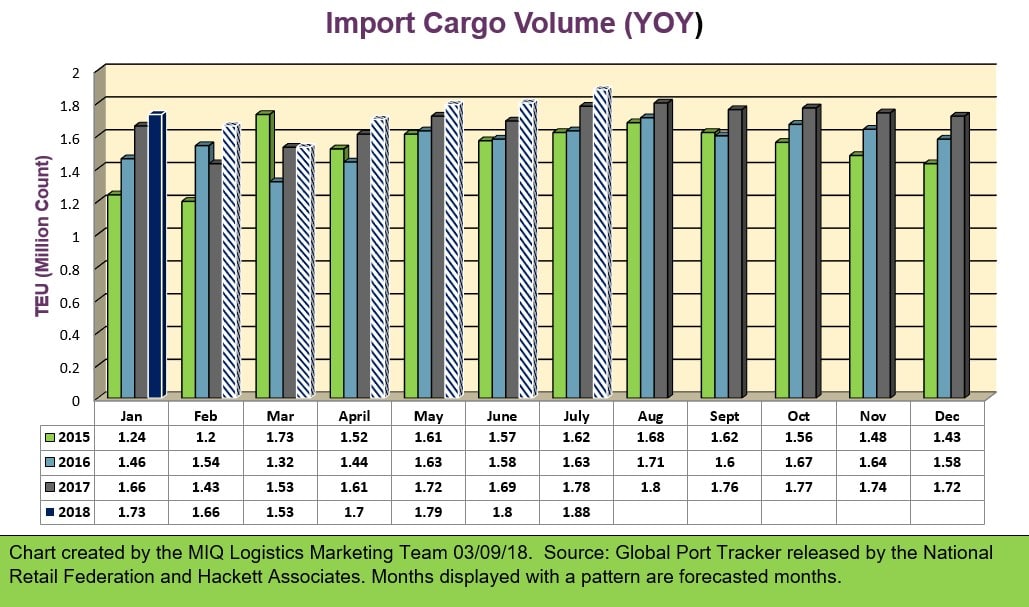 “With steel and aluminum tariffs already in place, new tariffs on goods from China being threatened and the ongoing threat of NAFTA withdrawal, we could very quickly have a trade war on our hands,” NRF Vice President for Supply Chain and Customs Policy Jonathan Gold said. “The immediate impact would be higher prices for American consumers that would throw away the gains of tax reform and put a roadblock in front of economic growth. But in the long term we could see a loss in cargo volume and all the jobs that depend on it, from dockworkers on down through the supply chain.”

“A potential trade war would have a negative impact on cargo growth to the detriment of both the consumer and U.S. industry,” Hackett Associates Founder Ben Hackett said. “The likelihood of an increase in exports evaporates as well, killing off any chance for an improvement in the balance of trade.”

Ports covered by Global Port Tracker handled 1.73 million Twenty-Foot Equivalent Units in January, the latest month for which after-the-fact numbers are available. That was up 0.2 percent from December and up 1.8 percent from a year ago. A TEU is one 20-foot-long cargo container or its equivalent.