October Imports Spike As Retailers Stock Up For Holidays

October is expected to be the second-busiest month of the year for the nation’s major retail container ports as merchants stock up for the holiday shopping season, according to the monthly Global Port Tracker report released today by the National Retail Federation and Hackett Associates. 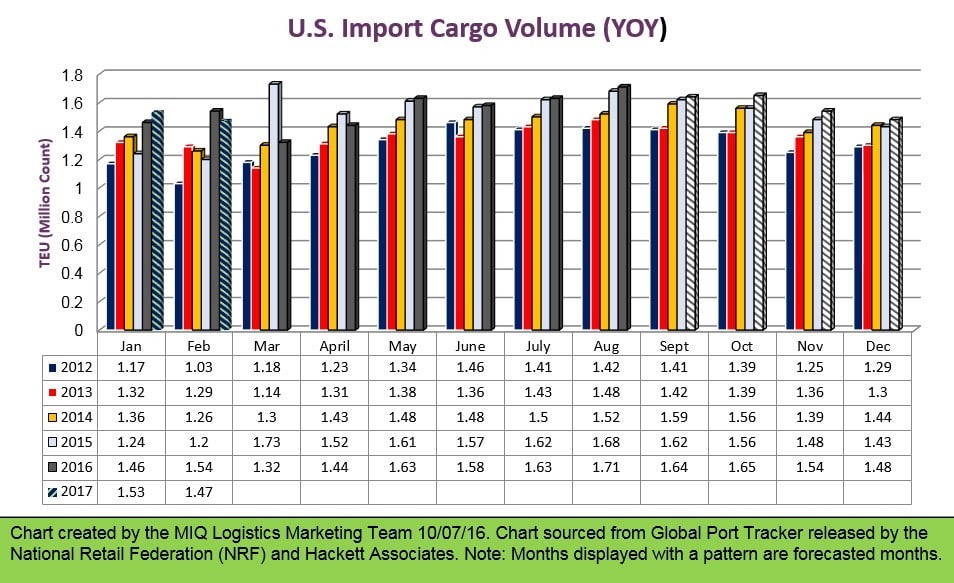 “The holidays are nearly here, and from warehouses to store shelves, retailers are making sure they have the merchandise on hand to meet consumers’ demands,” NRF Vice President for Supply Chain and Customs Policy Jonathan Gold said. “November and December are the busiest time for holiday shopping, but this is the month for the behind-the-scenes supply chain work that ensures shoppers will find what they want, where they want it, when they want it.”

Ports covered by Global Port Tracker handled 1.71 million Twenty-Foot Equivalent Units in August, the latest month for which after-the-fact numbers are available. That was up 5 percent from July and up 1.7 percent from August 2015, and has been the busiest month of the year so far. One TEU is one 20-foot-long cargo container or its equivalent.

After a long period of high inventory levels, Hackett Associates Founder Ben Hackett noted that the retail industry inventory-to-sales ratio stood at 1.49 in July, the latest number available from the U.S. Census Bureau. That was down from 1.5 in June and a peak of 1.52 in March.

>> Click here to read the latest release from the National Retail Federation.