PANDEMIC’S IMPACT ON IMPORTS EASING, BUT NUMBERS ARE STILL BELOW LAST YEAR

The impact of COVID-19 at major U.S. retail container ports appears to be easing slightly, with projected imports remaining below last year’s levels but not as much as previously forecast, according to the Global Port Tracker report released today by the National Retail Federation and Hackett Associates. 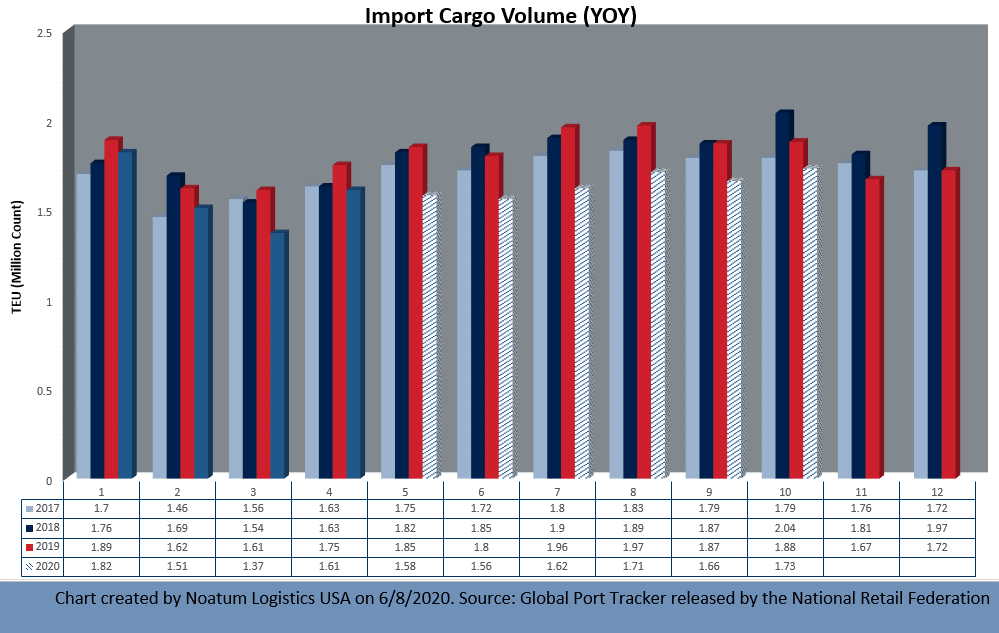 “The numbers we’re seeing are still below last year, but are better than what we expected a month ago,” NRF Vice President for Supply Chain and Customs Policy Jonathan Gold said. “It may still be too soon to say but we’ll take that as a sign that the situation could be slowly starting to improve. Consumers want to get back to shopping, and as more people get back to work, retailers want to be sure their shelves are stocked.”

“Imports are erratic, with one month up and the next down,” Hackett Associates Founder Ben Hackett said. “Getting 40 million people back to work will take time, especially with many fearful of catching the virus and staying home. That makes a rapid return to an economic boom unlikely.”

U.S. ports covered by Global Port Tracker handled 1.61 million Twenty-Foot Equivalent Units in April, the latest month for which after-the-fact numbers are available. That was down 7.8 percent from a year earlier, but up 17 percent from a four-year low seen in March and significantly better than the 1.51 million TEU previously expected. A TEU is one 20-foot-long cargo container or its equivalent.

Imports for the six-month period from April through September are expected to total 9.74 million TEU, a 3 percent improvement from the 9.46 million TEU expected a month ago.