While United States-bound retail container volumes trended down in December, the over all outlook for 2017 volumes appears to be solid, according to the most recent edition of the Port Tracker report issued by the National Retail Federation (NRF) and maritime consultancy Hackett Associates. 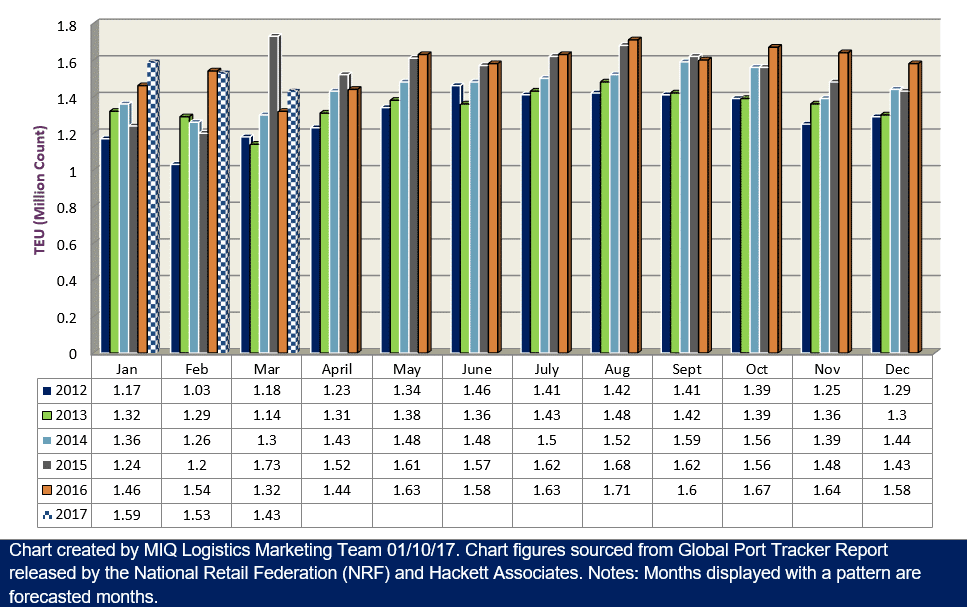 For the first half of 2017, the report said it expects import volumes to be up 4.6 percent annually at 9.4 million TEU (Twenty-Foot Equivalent Units), attributing the projected growth to ongoing economic improvement and growing retail sales. Should this forecast hold true, the report said that it would nearly triple the 1.6 percent growth rate which occurred in the first half of 2016 compared to 2015.

“This is very much in line with what we are forecasting for retail sales and consumer spending this year,” NRF Vice President for Supply Chain and Customs Policy Jonathan Gold said in a statement. “Retailers try to balance inventories very carefully with demand. So, when retailers import more merchandise, that’s a pretty good indicator of what they are expecting to happen with sales.”

For the month of December, the most recent month for which data is available, total volume dropped 3.8 percent compared to November and was up 10.2 percent annually at 1.58 million TEU. This tally topped the previous estimate for December, which was 1.54 million TEU.

These estimates comes on the heels of the NRF’s forecast of 2017 retail sales to be up between 3.7 to 4.2 percent annually, with job and income growth, coupled with low debt, demonstrating that the fundamentals are in place and consumers are leading the way, the report said.

In the report, Hackett Associates Founder Ben Hackett wrote that while the global economy over the last six years has seen very slow growth “bordering on stagnation,” while recessions were avoided, the driver for what little growth was seen was due to consumer activity.

“Despite the global outlook, the United States is well placed in 2017 and is likely to outperform most of the rest of the developed economies,” he wrote. “If the infrastructure investments promised by the new administration come about, we can expect stronger growth than in 2016, but that assumes good relationships with U.S. trading partners and no recourse to tariff barriers that would result in a tit-for-tat response. If a protectionist agenda is enforced, however, then there is a strong likelihood that growth will not increase and could be in danger of declining, but that is unlikely to happen before late in the year at the earliest.”