United States-bound import volumes appear to be taking steps to more normalized seasonal patterns, according to the most recent edition of the Port Tracker report issued today by the National Retail Federation (NRF) and maritime consultancy Hackett Associates. 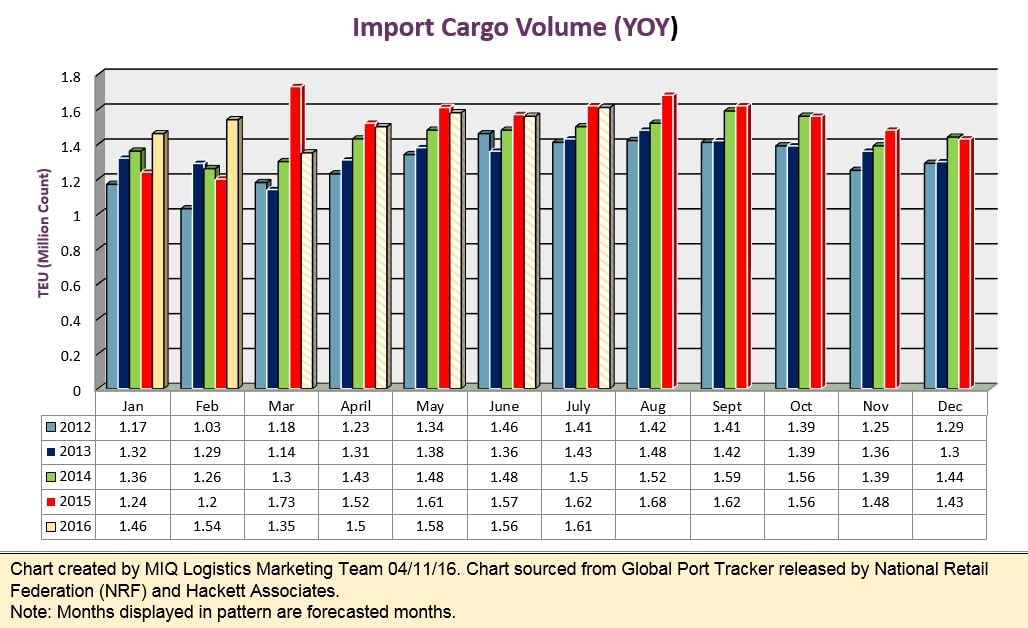 “Last year was a roller coaster but this year we’re expecting a nice, steady climb right through the summer,” NRF Vice President for Supply Chain and Customs Policy Jonathan Gold said. “We’re finally getting back to normal patterns as cargo builds up toward the back-to-school season and eventually the holiday season. Despite the year-over-year comparisons, these are still strong numbers.”

For February, the most recent month for which data is available, total volume came in at 1.54 million Twenty-Foot Equivalent Units (TEU), which was 3.7 percent below January and up 28.9 percent compared to February 2015,  a month that saw unusually low volumes leading up to the signing of a new labor contract between the Pacific Maritime Association and the International Longshore and Warehouse Union. A tentative contract between the parties was signed in February 2015.

As previously reported, the combination of West Coast port labor issues, which led to congestion, hindered port production and throughput from late 2014 into the first quarter of 2015 are expected to result in atypically high annual comparisons before returning to a more normalized rate in April, according to Port Tracker.

March volumes are pegged to be down 22.1 percent at 1.35 million TEU annually, with March 2015 having been very high as the February 2015 contract agreement led to a release of backlogged cargo, the report noted.

Hackett Associates Founder Ben Hackett was not bullish on the current economic outlook as it relates to import numbers, citing still-high inventory levels that are offset by recent modest manufacturing gains.

“As economic indicators continue to report contradictory numbers we struggle to identify which are more dominant and to assess what has changed,” Hackett wrote in the report. “The biggest worry remains the inventory-to-sales ratio. The total ratio for all businesses has climbed from a low of 1.25 in January 2012 to 1.4 in January of this year. By comparison, in the 2001 recession it reached 1.44 in January, and during the more recent Great Recession it managed to reach an all-time high of 1.48. For retail, the inventory-to-sales ratio hit a high of 1.63 in September 2001 and 1.62 in December 2008. As of this January, it stood at 1.5. Now that you can see the concern we have, is it telling us something?”