Annual growth for import cargo volume at United States-based retail container ports appears to be in the cards with holiday shopping season underway, according to the Global Port Tracker report from the National Retail Federation (NRF) and maritime consultancy Hackett Associates. 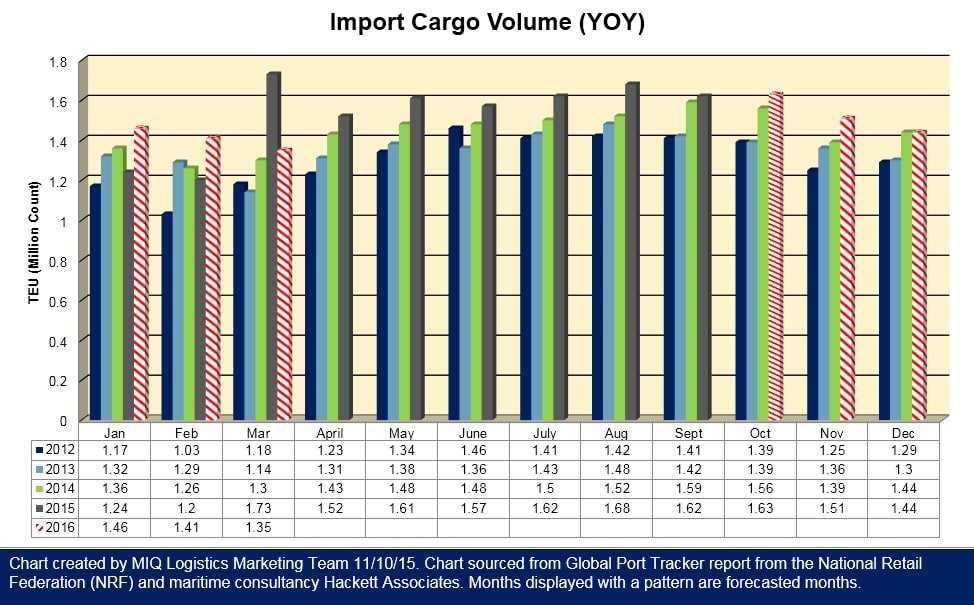 “Conditions aren’t perfect but the ports are running reasonably well,” NRF Vice President for Supply Chain and Customs Policy Jonathan Gold said in a statement. “That’s a dramatic difference from this time last year, when the West Coast ports were experiencing slowdowns and congestion from labor negotiations. Retailers had instituted costly contingency plans but were still worried about whether merchandise would be unloaded in time for the holidays. This year, most merchandise has already arrived and replenishment should not be a problem.”

The combination of West Coast port labor issues, which hindered port production and throughput from late last year into the first quarter of this year, being settled, and the NRF’s forecast of 3.7 percent annual holiday sales gains (for the months of November and December) are expected to drive import volume gains through the end of 2015 and into early 2016.

Hackett Associates Founder Ben Hackett wrote in the report that the current forecast for all of 2015 is now at 6.2 percent for all ports it covers, which he said marks a marginal increase compared to the previous Port Tracker report, as consumers continue a cautious approach to spending. And while the savings ration is below 5 percent, he said it is expected to drop for the early part of the holiday shopping season before heading up in December.

And he added that even though the first GDP estimate for the third quarter came in at a low 1.5 percent, that was due in large part to companies running down large inventories that had climbed because of the West Coast port labor situation. The inventory-to-sales ration could decrease in the coming weeks, too, he said, and drive GDP gains. He also added that “inflation remains non-existent” while unemployment is around 5 percent, with the expectation that will lead to higher sales numbers.

“We are not seeing much of a Peak Season this year because of the inventory overhang,” he told LM. “When we see the September numbers, we expect to see an indication that inventory levels are heading down.”

Hackett said that compared to a year ago this time, U.S. ports are in a better position as they are not dealing with labor-related issues even though growth is a bit less than what was originally estimated year-to-date (imports to the West Coast from January through October were projected at 9.04 percent, with the actual down off 1 percent at 8.97 million). He also added that compared to the situation in Europe, the U.S. is “booming” by comparison.

>> Click here to read the entire article on Logistics Management.