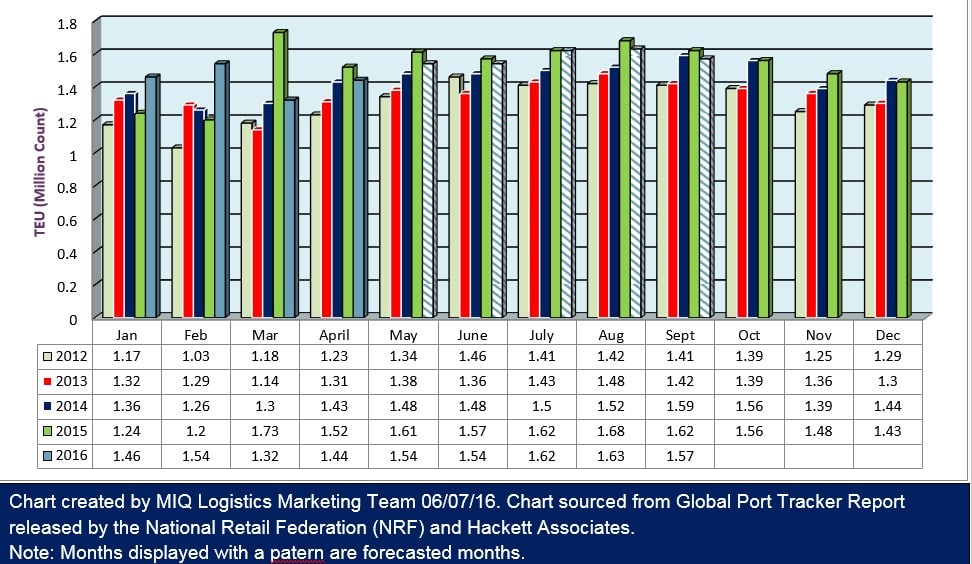 “The unusual patterns seen last year in the aftermath of the West Coast ports slowdown are continuing to make valid year-over-year comparisons difficult,” NRF Vice President for Supply Chain and Customs Policy Jonathan Gold said in a statement. “Retailers are balancing imports with existing inventories but consumers can expect to see plenty of merchandise on the shelves for both back-to-school and the holidays.”

For April, the most recent month for which data is available, total volume was 1.44 million Twenty-Foot Equivalent Units (TEU), which was up 9.1 percent from March and down 4.6 percent annually.

The combination of West Coast port labor issues, which led to congestion, hindered port production and throughput from late 2014 into the first quarter of 2015 were expected to result in atypically high annual comparisons before returning to a more normalized rate in April, which is when 2015 volumes began to stabilize, according to Port Tracker.

Port Tracker said that the first half of 2016 is expected to come in at 8.9 million TEU, which would mark 0.3 percent annual gain over the same period in 2015.

Hackett Associates Founder Ben Hackett wrote in the report that his firm’s port models are projecting weak imports in volume terms, not to be confused with total dollar value.

As for the underlying reason for projected low volume imports, Hackett pointed to the common theme of still-high inventories.

“Inventories remain very high, pointing to an overstocked situation that will depress the volume of imports in the coming peak season,” he wrote. “All the excitement about volume growth in the first four months is based by the data from 2015. On a year-to-date level, things are not so exciting. Unless inventories drop through further consumer spending, import growth will remain sparse.”

Other factors weighing on import growth cited by Hackett included: May’s jobs report being the lowest in nearly six years and reflecting concern about U.S. growth; workers’ pay increased 2.5 percent for the 12-month period ending in May, which could translate into increased retail spending; and consumer confidence in May was ahead of April but below expectations.