A widely-cited AXIOS report indicates the President intends to impose 20% tariffs on Steel and possibly other imports, against the advice of his cabinet.  Other products under scrutiny include Aluminum, Solar Cells and Washing Machines.

More expansive than Antidumping or Countervailing Duty, Section 232 of the Trade Expansion Act of 1962  (Sec 232 – National Security: Steel, Aluminum) and Section 201 of the Trade Act of 1974 (Sec 201 – Global Safeguards: Solar Cells, Washing Machines) permit the imposition  of trade barriers, including increased duties, across all origins and, is not trading-partner specific.

The plan to restrict imports of Steel and Aluminum for national security reasons came under fire at the World Trade Organization on June 30th, with China, the European Union, Brazil, Australia, Taiwan and Russia raising concerns.

A Report by the Peterson Institute for International Economics (PIIE) suggests that if the Administration decides to increase trade barriers under US trade laws based on political, not economic, considerations, trading partners may respond in kind.  These admonishments may have some impact on the Administration’s thinking. The Wall Street Journal reported on July 25 that the President said his Administration would take its time in making a long-awaited decision on whether to block steel imports, saying, “we don’t want to do it at this moment.” 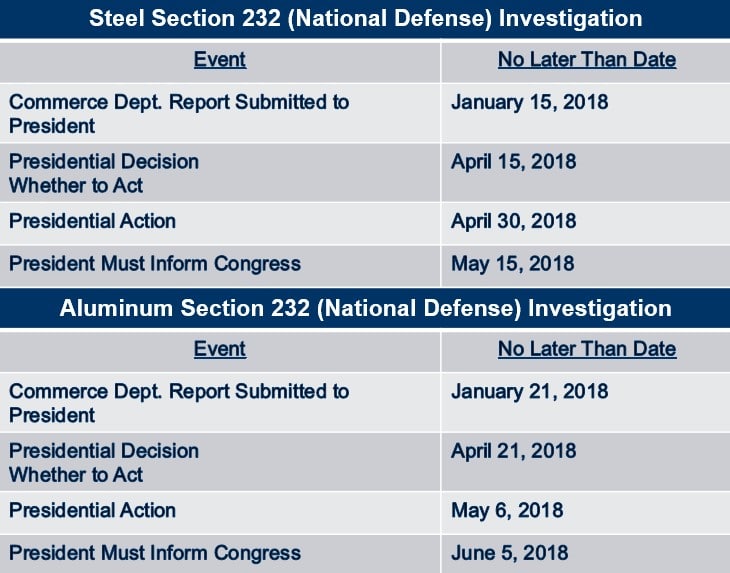 The Administration formally gave notice to U.S. Congress on May 19th  that they will renegotiate the NAFTA.  The USTR published a “Summary of Objectives for the NAFTA Renegotiation” on July 17.  Among the mostly standard FTA objectives, two deserve close attention:

The renegotiation process is expected to begin no earlier than August 16.

President Trump announced on June 16th that he will reinstate certain travel and commercial restrictions related to Cuba that had been eased under the Obama Administration.  It does not appear that the announced changes will affect most measures implemented by President Obama.


The practical impact of the changes announced by the President relates to two primary areas: focusing on new restrictions on individual travel to Cuba and on dealings with Cuban military-related entities.  The Department of the Treasury, Office of Foreign Assets Control (OFAC) provided preliminary FAQ guidance on July 25, 2017.  According to OFAC, the announced changes will not become effective until the new regulations are issued.

CSMS# 17-000375 (June 27, 2017) announced that CBP is rescheduling the last primary deployment of core trade processing capabilities in ACE which had been scheduled for July 8, 2017. This deployment includes liquidation (with the exception of the previously deployed electronic posting of the Notices of Liquidation on CBP.gov), reconciliation, drawback, duty deferral, collections and the Automated Surety Interface (ASI).

The U.K. and U.S. will begin “actual discussions” over a post-Brexit trade agreement on July 24, U.K. Trade Secretary Liam Fox told BBC TV’s Question Time. Britain cannot formally sign trade deals with other countries until it leaves the EU in March 2019, but can prepare the groundwork for them to be ratified soon after.