Imports at the nation’s largest retail container ports saw their busiest April on record and May could turn out to have set a new all-time record as vaccines allowed consumers to return to normal shopping patterns, according to the monthly Global Port Tracker report released today by the National Retail Federation and Hackett Associates. 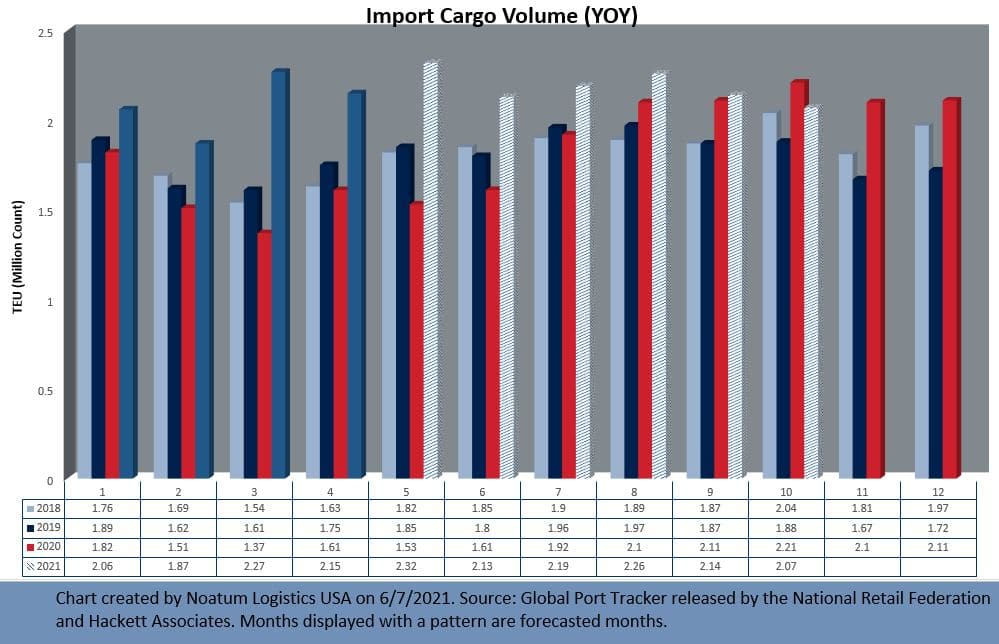 “Vaccine rates are increasing, shoppers are back in stores and retail supply chains are working overtime,” NRF Vice President for Supply Chain and Customs Policy Jonathan Gold said. “There’s no shortage of demand from consumers, but there continue to be shortages of labor, equipment and shipping capacity to meet that demand. Supply chain disruptions, port congestion and rising shipping costs could continue to be challenges through the end of the year.”

“Supply chains are finding it difficult to keep up with demand as shipping capacity struggles,” Hackett Associates Founder Ben Hackett said. “A number of vessels taken out of service when volumes were low remain in drydock while others are delayed in congested ports, which face a lack of manpower both because of COVID-19 illnesses and the tight labor market. Many people remain hesitant about returning to work, affecting ports, rail, trucking and distribution centers.”

U.S. ports covered by Global Port Tracker handled 2.15 million TEU in April, the latest month for which final numbers are available. That was by far the busiest April on record and an increase of 33.4 percent from a year earlier, when most stores were closed by the coronavirus pandemic. April’s results followed 2.27 million TEU in March, which set the record for the most containers imported during a single month since NRF began tracking imports in 2002. A TEU is one 20-foot container or its equivalents.

Ports haven’t reported May numbers yet, but Global Port Tracker projected the month at 2.32 million TEU, which would be up 51.1 percent from the same time last year and would beat March’s total to set another new record for the largest number of containers in a single month.

The first half of 2021 is forecast at 12.8 million TEU, up 35.3 percent over the same period in 2020. As with each month this spring, the year-over-year comparison is skewed because of the sharp decline in imports during the first half of last year. But the six-month total would put 2021 on track to easily beat 2020’s full-year total of 22 million TEU, which was up 1.9 percent over 2019 despite the pandemic.