Imports at the nation’s largest retail container ports should hit yet another record in August as consumer demand continues to stretch supply chains and retailers shift from the back-to-school season to the peak shipping season for winter holiday merchandise, according to the monthly Global Port Tracker report released today by the National Retail Federation and Hackett Associates. 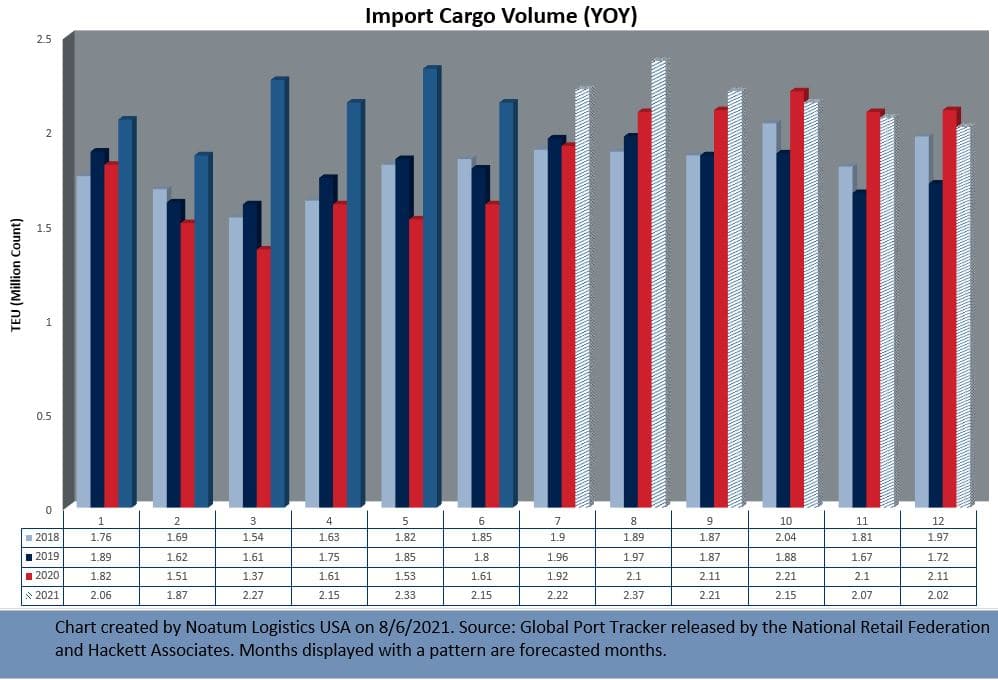 “Back-to-school supplies have been hit by the same supply chain disruptions and port congestion that have affected other products this year, but retailers are working hard to ensure that school and college goods are where they need to be,” NRF Vice President for Supply Chain and Customs Policy Jonathan Gold said. “Strong consumer demand has outpaced supply chain operations since late last year and could remain a challenge as the holidays approach. The continuing lack of labor, equipment and capacity has highlighted systemic issues and the need to create a truly 21st century supply chain to ensure resiliency against the next major disruption. Passage of infrastructure legislation currently pending in Congress is a key step in that direction. We need continued focus by the administration to help address these issues as well.”

“The strain of the continuing economic expansion is putting considerable pressure on the logistics supply chain,” Hackett Associates Founder Ben Hackett said. “We’re seeing a lack of shipping capacity combined with port congestion as vessels line up to discharge goods from both Asia and Europe. Delays are stretching to landside as port terminals struggle with space shortages, and labor challenges are affecting ports, railroads and trucking companies alike. This part of the recovery is not a pretty sight.”

U.S. ports covered by Global Port Tracker handled 2.15 million Twenty-Foot Equivalent Units in June, the latest month for which final numbers are available. That was down 7.8 percent from May but up 33.7 percent from a year earlier, when many stores were closed because of the pandemic. A TEU is one 20-foot container or its equivalent.
Ports have not reported July numbers yet, but Global Port Tracker projected the month at 2.22 million TEU, which would be up 15.7 percent from the same time last year.

August is forecast at 2.37 million TEU, which would be up 12.6 percent year-over-year and top May’s 2.33 million TEU for the largest number of containers imported during a single month since NRF began tracking imports in 2002. August is the beginning of the “peak season” when retailers stock up on holiday merchandise each year. Many retailers are moving up their shipments this year as part of their risk mitigation strategies to ensure that sufficient inventory will be available during the holidays.