Imports at retail container ports hit a new record this spring and volume during the first half of 2021 is expected to be a third higher than last year as the economy continues to recover from the pandemic, according to the monthly Global Port Tracker report released today by the National Retail Federation and Hackett Associates. 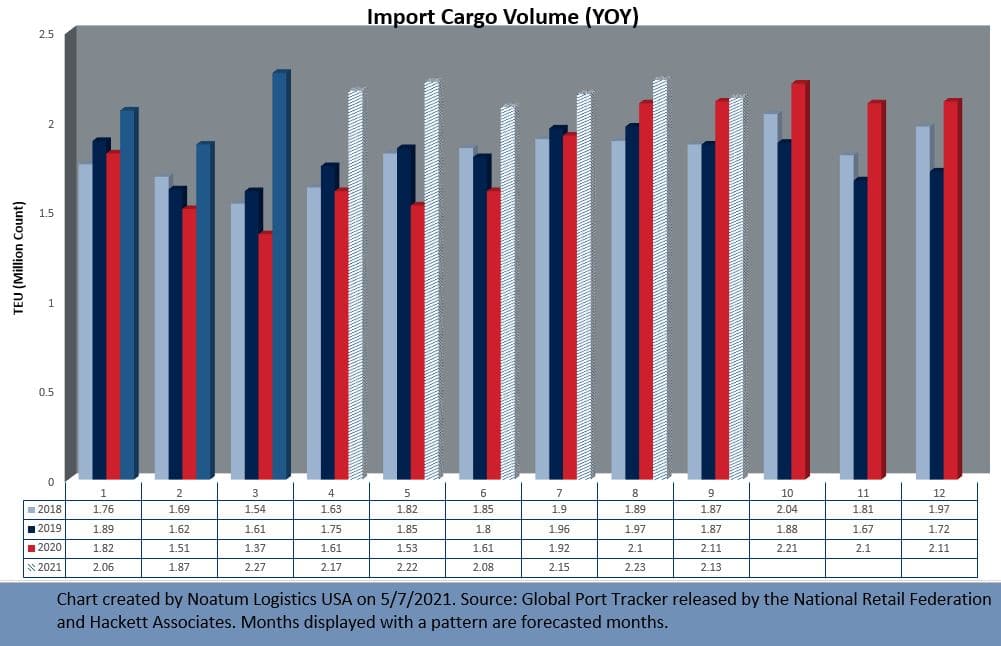 “Despite the continuing pandemic, most consumers are in good financial health and aren’t hesitating to spend,” NRF Vice President for Supply Chain and Customs Policy Jonathan Gold said. “More spending translates into more merchandise arriving at our ports as retailers continue to meet increasing demand. The cargo surge that began last fall doesn’t show any sign of stopping. Unfortunately, disruption and congestion issues are also continuing.”

U.S. ports covered by Global Port Tracker handled 2.27 million TEU in March, the latest month for which final numbers are available. That was up 21.2 percent from February and set a new record for the number of containers seen during a single month since NRF began tracking imports in 2002. The previous record was 2.21 million TEU set last October. A TEU is one 20-foot container or its equivalent.

March volume was up a record 64.9 percent year-over-year but the growth rate was artificially high because many Asian factories had shut down because of the pandemic at that point last year and most U.S. stores were being ordered to close.

The first half of 2021 is forecast to be up 33.9 percent from the same period in 2020. As with March, the growth is skewed because of the sharp decline in imports during the first half of last year. But the six-month total of 12.7 million TEU would put 2021 on track to beat 2020’s full-year total of 22 million TEU, which was up 1.9 percent over 2019 despite the pandemic.

The ongoing high cargo volume reflects the recovering U.S. economy. Gross domestic product grew at an annual rate of 6.4 percent in the first quarter and some economists are predicting 13 percent in the second quarter.

“Growth that fast is a clear indication that U.S. economic output has almost recovered to its level before the pandemic struck,” Hackett Associates Founder Ben Hackett said. “Retail sales numbers show consumers are spending a large portion of their stimulus checks as well as savings that accumulated while staying home rather than going out and income from new jobs. This is turning out to be a year of super growth that will act as the driver of the global economy.”

Congestion at the Ports of Los Angeles and Long Beach – the nation’s largest ports – has begun to ease as carriers have shifted vessels to the Pacific Northwest or to the East Coast via the Panama Canal, Hackett said. But some ships are still facing delays to unload as ports work at capacity and COVID-19 infections impact workers. Shortages of containers and other equipment and operational issues also continue to slow down the supply chain.