After a year of unprecedented increases, imports at the nation’s major retail container ports are expected to return to normal growth rates in 2022 but volumes will remain high, according to the monthly Global Port Tracker report released today by the National Retail Federation and Hackett Associates. 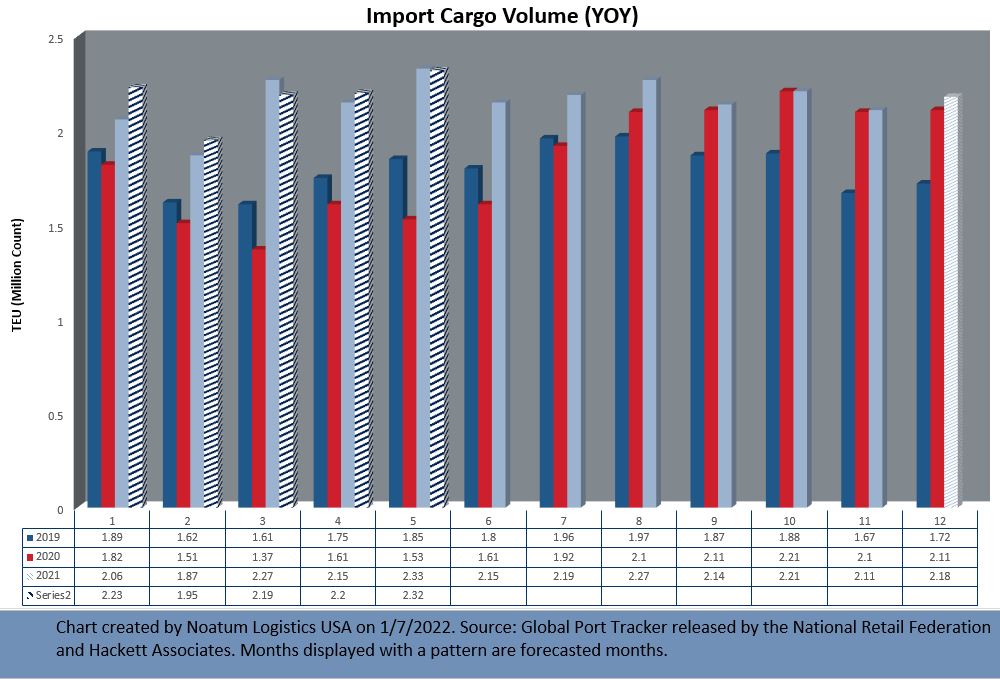 “Even with the holiday season behind us, supply chain challenges continue,” NRF Vice President for Supply Chain and Customs Policy Jonathan Gold said. “The huge increases in imports we’ve seen have leveled out, but volume is still at high levels. We hope the system will find a way to catch up, but there is much that remains to be done to clear out port backlogs and increase capacity throughout the supply chain. Amid all of this, the omicron variant is a wild card that could not only impact the supply chain workforce but once again drive more imports if consumers stay home and spend their money on retail goods rather than going out.”

“Economic indicators are giving us a paradoxical view of the direction of the U.S. and global economies,” Hackett Associates Founder Ben Hackett said. “The atmosphere of uncertainty is likely to have an impact on demand going forward. We are already seeing short-term growth rates declining, and we believe trade growth is returning to normal levels reflective of economic factors. We do not expect that double-digit expansion of import volumes will continue in 2022.”

Imports saw year-over-year growth as high as 65 percent in some months during 2021. That was the result of increased consumer demand, retailers’ efforts to stock up to mitigate supply chain challenges, and comparisons against periods early in 2020 when many stores were closed because of the pandemic. But increases returned to single digits by last fall and should remain there this year. Nonetheless, volumes of about 2.2 million Twenty-Foot Equivalent Units or more expected during most months in the first half of 2022 will be near-records.

U.S. ports covered by Global Port Tracker handled 2.11 million TEU in November, the latest month for which final numbers are available. That was down 4.5 percent from October but up 0.5 percent year-over-year. Ports have not reported December numbers yet, but Global Port Tracker projected the month at 2.18 million TEU, up 3.7 percent year-over-year. A TEU is one 20-foot container or its equivalent.

How to build a stronger and more sustainable supply chain will be addressed as retailers, industry experts and technology innovators meet at the NRF Supply Chain 360 conference in Cleveland in June.