“Import cargo volume at the nation’s major retail container ports is expected to see a final surge and set a new monthly record in October as the holiday season approaches, according to the monthly Global Port Tracker report released today by the National Retail Federation and Hackett Associates.”

“Increasing congestion at the nation’s ports as well as the ongoing West Coast labor negotiations are ongoing concerns and retailers are making one last push to make sure they’re stocked up for the holidays,” NRF Vice President for Supply Chain and Customs Policy Jonathan Gold said. “Retailers are working hard to make sure customers can find what they’re looking for regardless of what happens at the ports.” 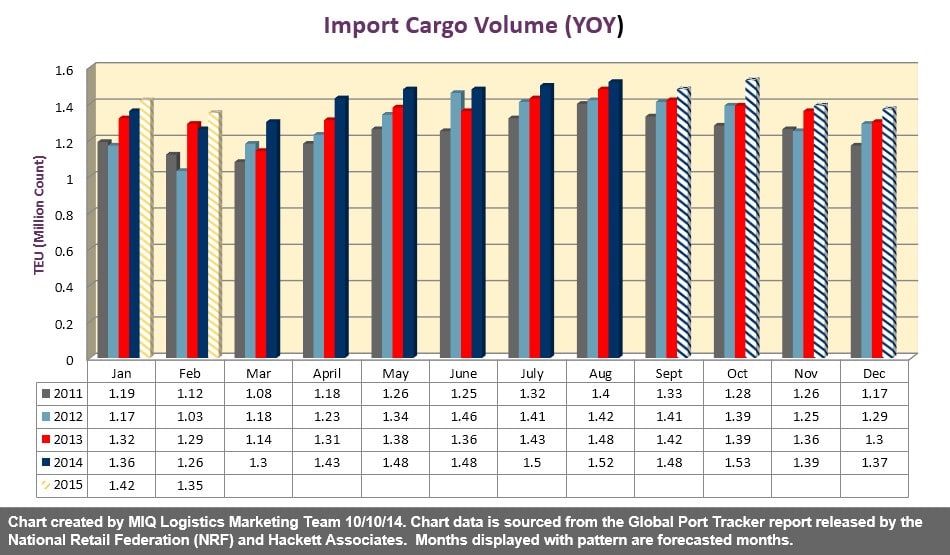 “Import volume at U.S. ports covered by the Global Port Tracker report is expected to total 1.53 million containers this month, topping the 1.52 million monthly record set in August. Cargo volume has been well above average each month since spring as retailers have imported merchandise early in case of any disruption on the docks.”

“The contract between the Pacific Maritime Association and the International Longshore and Warehouse Union expired on July 1, prompting concerns about potential disruptions that could affect back-to-school or holiday merchandise. Dockworkers remain on the job as negotiations continue but the lack of a contract and operational issues have led to record congestion at the ports.”

“The 1.52 million Twenty-Foot Equivalent Units handled in August, the latest month for which after-the-fact numbers are available, was up 1.5 percent from July and 2.1 percent from August 2013. One TEU is one 20-foot cargo container or its equivalent.”