Imports at the nation’s major retail container ports should continue to see strong increases throughout the spring and summer as the nation’s economy improves, according to the monthly Global Port Tracker report released today by the National Retail Federation and Hackett Associates. 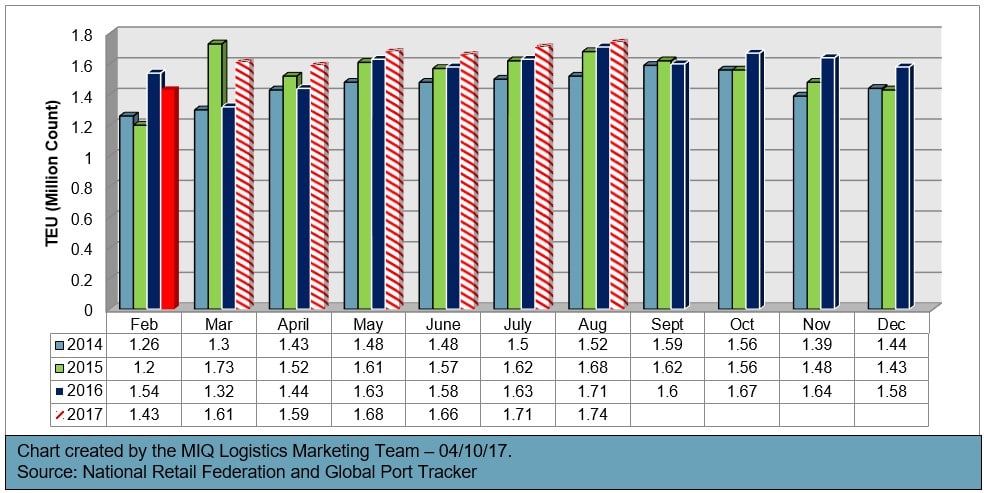 “Consumers are spending more, and these import numbers show that retailers expect that to continue for a significant period,” NRF Vice President for Supply Chain and Customs Policy Jonathan Gold said. “This is a clear sign that the economy has long-term momentum regardless of month-to-month fluctuations. Whether it’s merchandise for store shelves or parts for U.S. factories, imports play a vital role in American prosperity.”

“Our view that imports will continue to be stable despite the uncertainties of the new administration’s trade policies remains unchanged,” Hackett Associates Founder Ben Hackett said. “Despite pre-election promises, there has been little real change in trade policy so far and little change is expected for the greater part of the year.”

Ports covered by Global Port Tracker handled 1.43 million Twenty-Foot Equivalent Units in February, the latest month for which after-the-fact numbers are available. That was a decrease of 14.3 percent from January as many Asian factories shut down for Lunar New Year, and down 7 percent from the same month a year ago. Coming after the winter holidays and before retailers stock up for summer, February is historically the slowest month of the year for imports. One TEU is one 20-foot-long cargo container or its equivalent.

Source: Click here to read the entire posts from the National Retail Federation.