The rate of import growth at the nation’s major retail container ports has begun to slow after double-digit surges earlier this year but volume should nonetheless hit an all-time high by the end of the summer, according to the monthly Global Port Tracker report released today by the National Retail Federation and Hackett Associates. 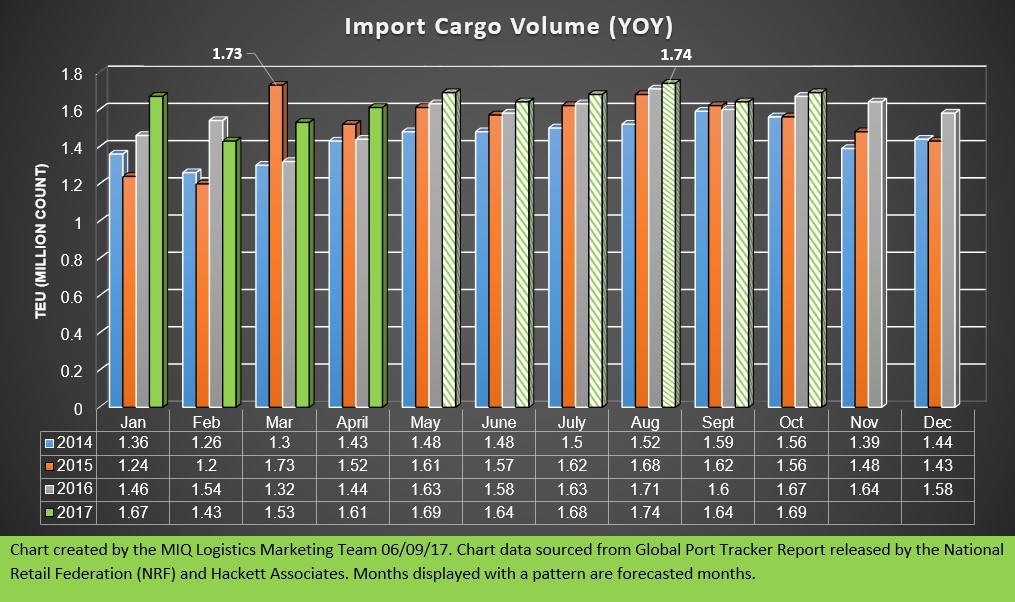 “Year-over-year comparisons are slowing down but that’s largely because we had some unusual numbers early this year and strong volume in the second half of last year,” NRF Vice President for Supply Chain and Customs Policy Jonathan Gold said. “Despite that, we’re expecting some of the largest import volumes we’ve ever seen, and that’s because retailers are responding to strong consumer demand.”

Ports covered by Global Port Tracker handled 1.61 million Twenty-Foot Equivalent Units in April, the latest month for which after-the-fact numbers are available. That was up 4.8 percent from March and up 11.3 percent from April 2016. One TEU is one 20-foot-long cargo container or its equivalent.

The August figure would be the highest monthly volume recorded since NRF began tracking imports in 2000, topping the 1.73 million TEU seen in March 2015. The May and October numbers would be among the five highest ever recorded.

Hackett Associates Founder Ben Hackett said the falling rate of growth in imports has been reflected in lower industrial output growth at factories in China, which increased 6.5 percent in April compared with 7.6 percent in March and is expected to drop further when May numbers are released.

“We can assume that part of the reason for the lower-than-expected increase was due to continuing slow growth in the Western Hemisphere,” Hackett said. “Retail sales continue to hold up but nothing coming out of Washington suggests an impetus to growth.”