With the retail industry in its annual lull between seasons and plans for a tariff increase on hold, imports at the nation’s major retail container ports are expected to drop to their lowest level in almost a year this month, according to the monthly Global Port Tracker report released today by the National Retail Federation and Hackett Associates.

“Now that the holiday season is over and summer has yet to crank up, this is the quiet time of year for retail supply chains,” NRF Vice President for Supply Chain and Customs Policy Jonathan Gold said. “Retailers are also taking a break from the rush to bring merchandise in ahead of tariff hikes now that the increase that was scheduled for March has been delayed. We are hoping that the delay is permanent and, better yet, that tariffs of the past year will be removed entirely. But either way, imports will start to build up again soon as retailers prepare for the summer.” 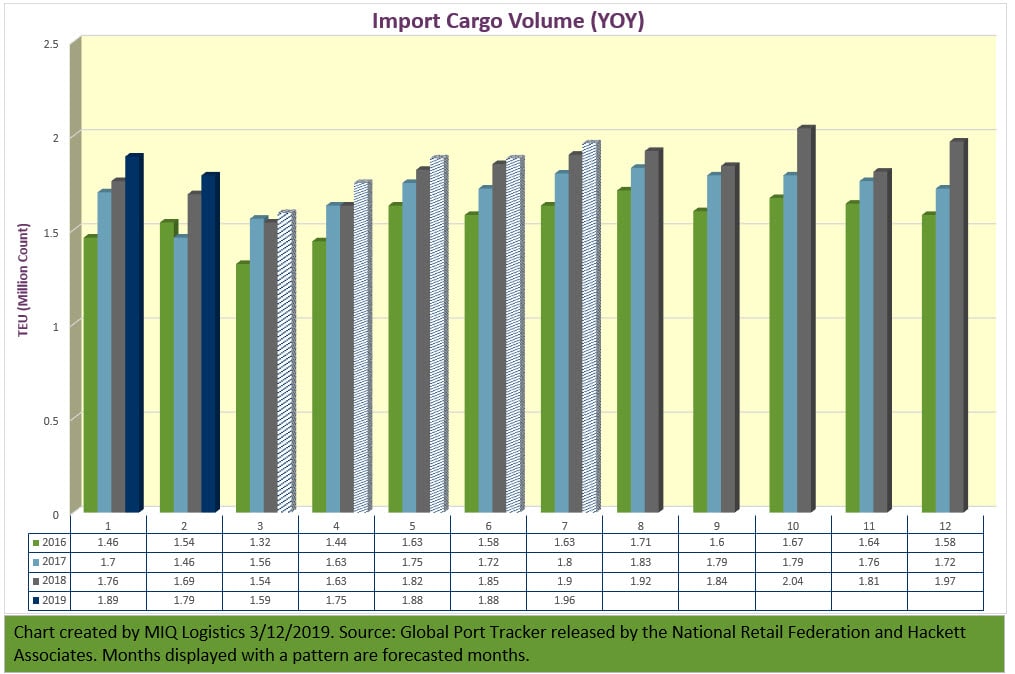 U.S. tariffs of 10 percent on $200 billion worth of Chinese goods that took effect last September were scheduled to increase to 25 percent on March 2 but the increase was postponed by President Trump, citing progress in talks between Washington and Beijing. The tariff increase is on hold until further notice as the United States and China try to conclude negotiations for a signing summit between Trump and President Xi later this month or in April.

U.S. ports covered by Global Port Tracker handled 1.89 million Twenty-Foot Equivalent Units in January, the latest month for which after-the-fact numbers are available. That was down 3.7 percent from December following the end of the holiday season but up 7.4 percent year-over-year. A TEU is one 20-foot-long cargo container or its equivalent.

February was estimated at 1.79 million TEU, up 6.2 percent from February 2018. March is forecast at 1.59 million TEU, up 3.2 percent year-over-year but the lowest level since 1.63 million TEU in April 2018. February and March are historically the two slowest shipping months of the year both because retailers are between major shopping seasons and because of factory shutdowns in Asia during the Lunar New Year holiday.

“The trade war with China is turning out not to have the results President Trump expected,” Hackett Associates Founder Ben Hackett said. “Imports from China did not decline – in fact, they soared to record levels.”