Following a record year during 2020, imports at the nation’s largest retail container ports are expected to set new monthly records from now into the summer as the nation’s economy continues to recover from the pandemic, according to the monthly Global Port Tracker report released today by the National Retail Federation and Hackett Associates. 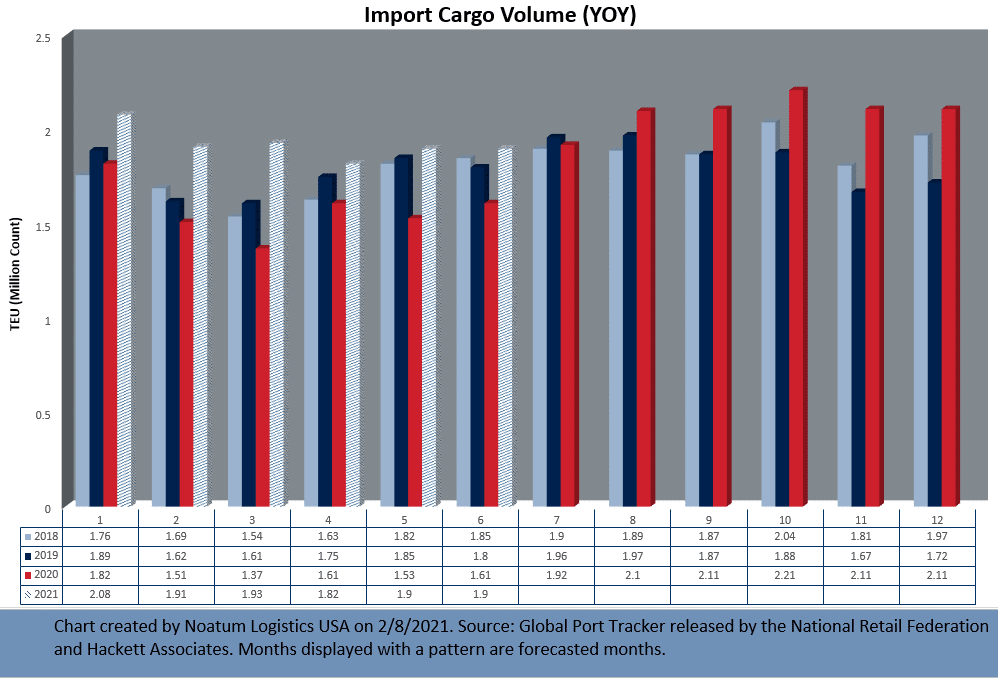 “The import numbers we’re seeing reflect retailers’ expectations for consumer demand to the point that many factories in Asia that normally close for Chinese New Year this month are remaining open to keep up,” NRF Vice President for Supply Chain and Customs Policy Jonathan Gold said. “Regardless of whether it’s in-store or on retailers’ websites, the record holiday season and numbers for 2020 show consumers are buying again and have been for a while. This surge has been going on for months, and retailers are importing merchandise faster than ever.”

Retail sales during the November-December holiday season in 2020 hit a record $789.4 billion, up 8.3 percent from 2019, and preliminary figures show retail sales for all of 2020 were up 6.8 percent year-over-year.

“As we continue to struggle with COVID-19 and the ups and downs in the economy, year-over-year increases in the flow of containerized goods have become dramatic,” Hackett Associates Founder Ben Hackett said. “It is impressive that the cargo volumes handled by the ports remain as high as they are despite congestion at the docks and the spread of the coronavirus among workers throughout the supply chain.”

U.S. ports covered by Global Port Tracker handled 2.11 million Twenty-Foot Equivalent Units in December, the latest month for which final numbers are available. That was up 0.2 percent from November and up 22.3 percent year-over-year. A TEU is one 20-foot container or its equivalent.

January results aren’t available yet but the month was projected at 2.08 million TEU, which would be up 14.6 percent over the same month last year and the busiest January since NRF began tracking imports in 2002, topping 1.89 million TEU in January 2019.

Each month from January through June would be a record for the month, and the first half of 2021 is forecast at 11.5 million TEU, up 22.1 percent from the same period in 2020, which experienced a major decline in imports due to the impact of COVID-19.