Imports at the nation’s major retail container ports are expected to grow steadily throughout the summer despite the prospect of heavy tariffs on goods from China, according to the monthly Global Port Tracker report released today by the National Retail Federation and Hackett Associates.

“With proposed tariffs yet to be officially imposed, retailers are stocking up on merchandise that could soon cost considerably more,” NRF Vice President for Supply Chain and Customs Policy Jonathan Gold said. “If tariffs do take effect, there’s no quick or easy way to switch where these products come from. American families will simply be stuck paying higher prices and hundreds of thousands of U.S. jobs could be lost.” 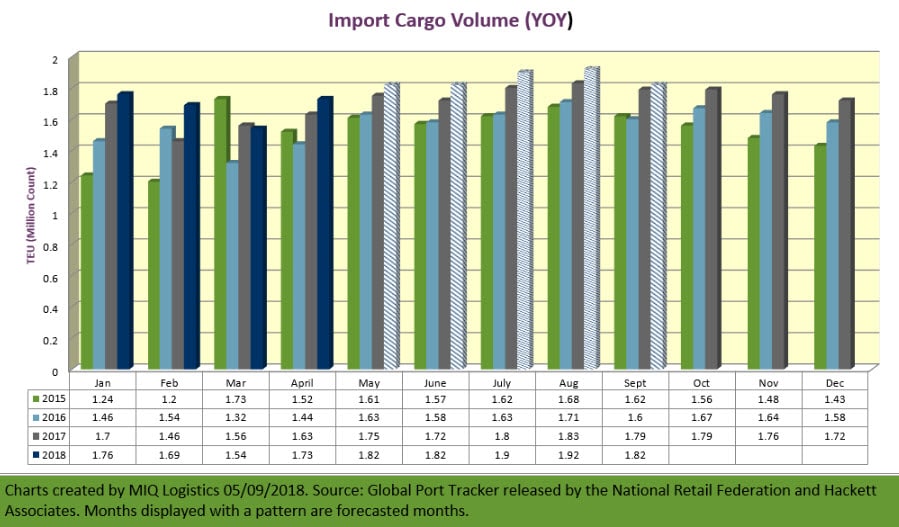 “Despite the threats and risks to trade, we continue to see solid expansion and our models are projecting this to continue throughout the year,” Hackett Associates Founder Ben Hackett said. “This is driven by a high level of confidence as the economy remains strong and unemployment is at its lowest level in nearly two decades.”

Ports covered by Global Port Tracker handled 1.54 million Twenty-Foot Equivalent Units in March, the latest month for which after-the-fact numbers are available. That was down 8.6 percent from February because of Lunar New Year factory shutdowns in Asia but down only 0.7 percent year-over-year. A TEU is one 20-foot-long cargo container or its equivalent.

The numbers forecast for July and August would each set new records for the number of containers imported in a single month, beating the previous high of 1.83 million TEU in August 2017.