Imports at major U.S. retail container ports are expected to remain significantly below last year’s levels into this fall as the impact of the COVID-19 pandemic continues, according to the monthly Global Port Tracker report released today by the National Retail Federation and Hackett Associates. 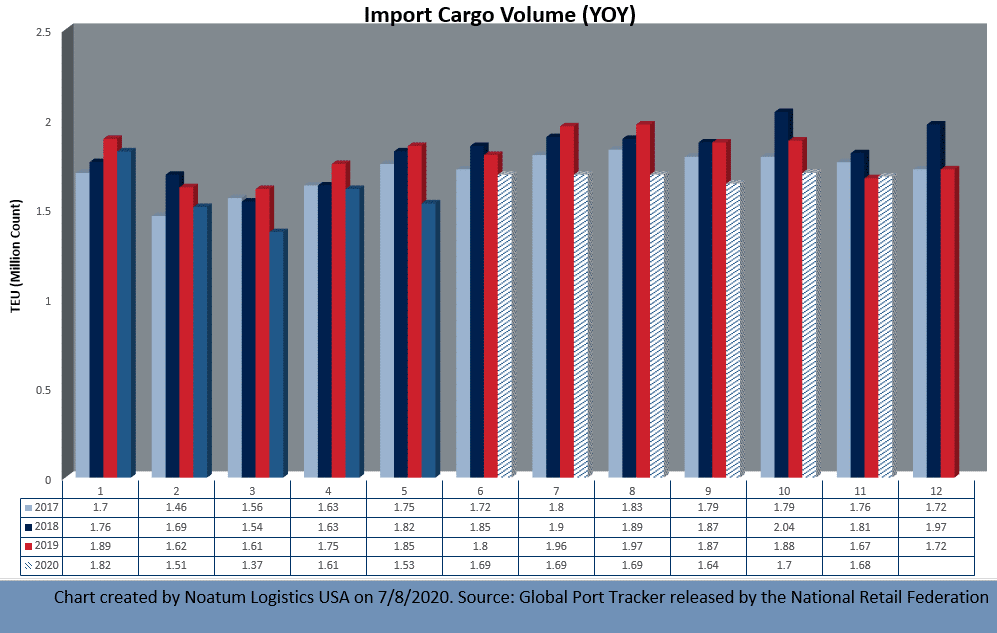 “Economic indicators show that the recession brought on by the pandemic may be easing, but retailers are being conservative with the amount of merchandise they import this year,” NRF Vice President for Supply Chain and Customs Policy Jonathan Gold said. “The outlook for imports is slowly improving, but these are still some of the lowest numbers we’ve seen in years.”

“U.S. imports are performing like a yo-yo, up one month and down the next with no apparent cause that can realistically point to either a crashing or booming economy,” Hackett Associates Founder Ben Hackett said. “We’re starting to go out to eat and buy clothing again, but how sustainable is that? The danger is that the rising number of virus infections is leading to renewed restrictions, which may cause demand to weaken again.”

U.S. ports covered by Global Port Tracker handled 1.53 million Twenty-Foot Equivalent Units in May, the latest month for which after-the-fact numbers are available. That was down 4.8 percent from April and down 17.2 percent year-over-year. A TEU is one 20-foot-long cargo container or its equivalent.

With imports usually trailing off in November and December after the bulk of holiday merchandise has arrived, the 1.7 million TEU figure for October is likely to be the busiest month of the traditional July-to-October “peak season” for shipping. If so, it would be the lowest peak since 1.61 million in September 2014.

The outlook is about the same as a month ago, with some months higher and some lower. Imports for the six-month period from May through October are expected to total 9.94 million TEU, a 0.7 percent improvement from the amount forecast a month ago.

The first half of 2020 is forecast to total 9.5 million TEU, down 9.3 percent from the same period last year but better than the 10 percent decline expected last month. Before the extent of the pandemic was known, the first half of the year was forecast at 10.47 million TEU.