Retail Imports Level Off after Rush to Beat Tariffs

Imports at the nation’s major retail container ports have slowed down after a months-long rush to beat increased tariffs on goods from China, according to the monthly Global Port Tracker report released today by the National Retail Federation and Hackett Associates.

“With the holiday season behind us, the immediate pressure to stock up on merchandise has passed but retailers remain concerned about tariffs and their impact on the nation’s economy,” NRF Vice President for Supply Chain and Customs Policy Jonathan Gold said. “Retailers have also brought in much of their spring merchandise early to protect consumers against higher prices that will eventually come with tariffs. Our industry is hoping the talks currently under way will bring an end to this ill-advised trade war and result in a more appropriate way of responding to China’s trade abuses that won’t force American consumers, workers and businesses to pay the price.” 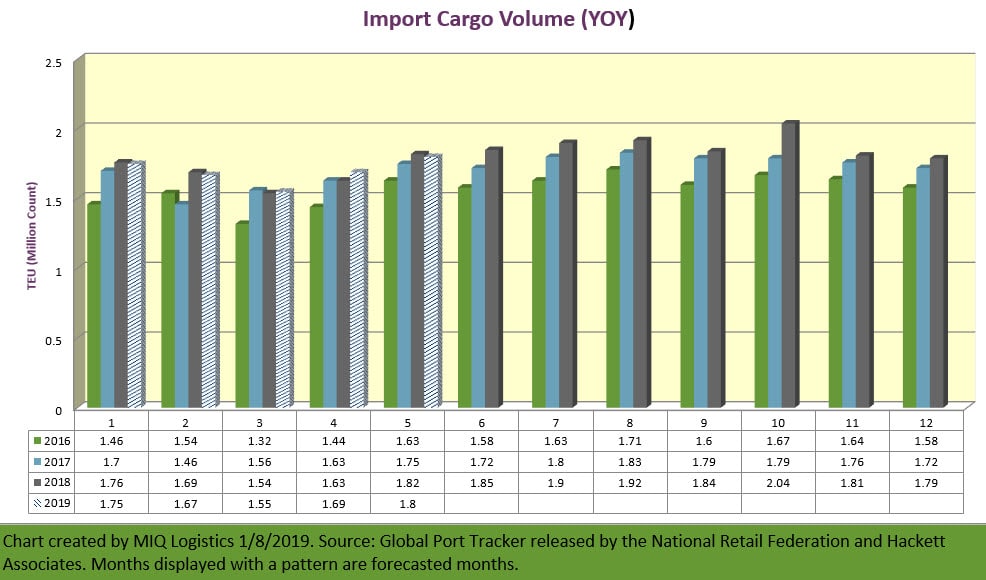 U.S. ports covered by Global Port Tracker handled 1.81 million Twenty-Foot Equivalent Units in November, the latest month for which after-the-fact numbers are available. That was up 2.5 percent year-over-year but down 11.4 percent from the record of 2.04 million TEU set in October. A TEU is one 20-foot-long cargo container or its equivalent.

“There have been record-high levels of imports over the past several months, primarily due to raised inventories ahead of expected tariff increases,” Hackett Associates Founder Ben Hackett said. “But we are projecting declining volumes in the coming months and an overall weakness in imports for the first half of the year.”