Imports at the nation’s largest retail container ports should remain at near-record levels this month but could see a slight dip from last year’s unusually high numbers as congestion slows the movement of backed-up cargo, according to the monthly Global Port Tracker report released today by the National Retail Federation and Hackett Associates. 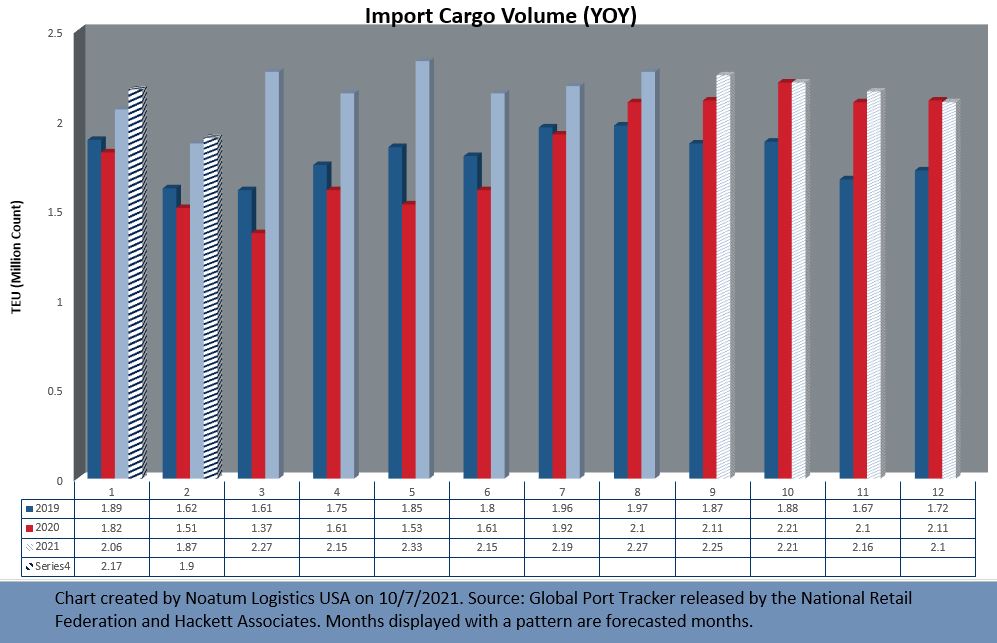 “The cargo is there for larger gains at several ports but congestion issues are impacting fluid operations,” NRF Vice President for Supply Chain and Customs Policy Jonathan Gold said. “Ships will eventually get unloaded but the pressure is on for everyone to work together to get the containers out as quickly as possible. Retailers are doing whatever it takes to make sure shelves are well-stocked for the holidays, from bringing in merchandise earlier to chartering their own ships. Consumers should be able to find what they need, but it’s always safer to shop early than wait until the last minute.”

“Just when we thought things couldn’t get any worse with the logistics supply chain, we’ve been proven wrong,” Hackett Associates Founder Ben Hackett said. “From power outages and port shutdowns in Asia to backed-up ships and shortages of truck drivers in the United States, there are few positive signs that the movement of consumer goods or the supply of inputs needed for industrial production is getting better.”

Hackett said COVID-19 infections in Asia have slowed the loading of U.S.-bound ships, while shortages of equipment, labor and outbound truck and rail capacity have continued to build congestion at U.S. ports. Close to 75 ships were waiting at anchor to enter the Ports of Los Angeles and Long Beach recently, up from around 25 a month earlier, and backups are spreading to East Coast ports as well.

U.S. ports covered by Global Port Tracker handled 2.27 million Twenty-Foot Equivalent Units in August, the latest month for which final numbers are available. That was up 3.5 percent from July and up 7.8 percent from a year earlier and tied March as the second-busiest month since NRF began tracking imports in 2002. May remains the busiest month on record at 2.33 million TEU. A TEU is one 20-foot container or its equivalent.
Ports have not reported September numbers yet, but Global Port Tracker projected the month at 2.25 million TEU, which would be up 6.7 percent year-over-year.

October is forecast at 2.21 million TEU. That would be down 0.3 percent from the same time last year, when imports surged dramatically as the economy reopened after the first wave of COVID-19 and retailers rushed to meet pent-up consumer demand, but still the sixth-busiest month on record as imports remain high. The year-over-year decline would be the first since July 2020.

The congestion and disruption come in the middle of the “peak season” for shipping when retailers stock up on holiday merchandise each year, but many retailers began bringing in holiday goods this summer to be sure sufficient inventory will be available.