Import cargo volume at the nation’s major retail container ports should see a small-but-significant increase this month as merchants stock up for the back-to-school season, then see a larger wave in late summer and fall for the holiday shopping season, according to the monthly Global Port Tracker report released today by the National Retail Federation and Hackett Associates. 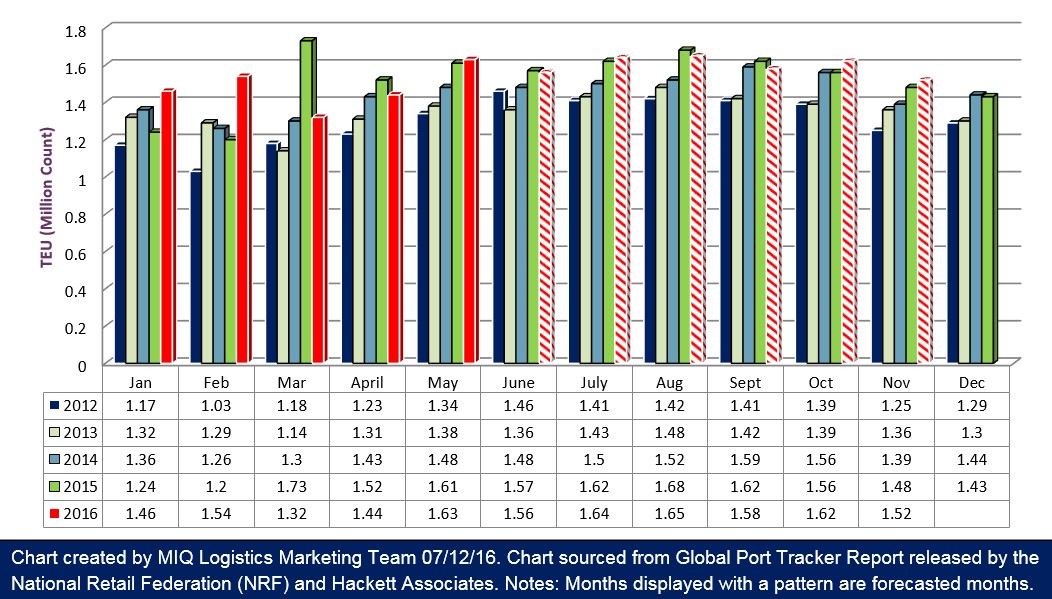 “Back-to-school and the holidays are the two biggest shopping seasons of the year for retailers and these numbers reflect that,” NRF Vice President for Supply Chain and Customs Policy Jonathan Gold said. “After a year of difficult comparisons in the wake of the West Coast ports slowdown, we’re finally starting to see normal trends. Some numbers are still down from last year, but the pattern of building up toward the big seasons has returned.”

Ports covered by Global Port Tracker handled 1.63 million Twenty-Foot Equivalent Units in May, the latest month for which after-the-fact numbers are available. That was up 12.8 percent from April and 1.1 percent from May 2015. One TEU is one 20-foot-long cargo container or its equivalent.

“Trade is holding on to a small margin of growth, but this growth comes in the face of some adverse statistics as well as positive ones,” Hackett Associates Founder Ben Hackett said. “The good news is that retail sales have remained positive as the consumer continues to cautiously spend. The hope is that this spending will continue.”

>> Click here to read the entire press release from the National Retail Federation.