With tariff increases delayed for the foreseeable future and the busy summer season approaching, imports at the nation’s major retail container ports are beginning to climb again, according to the monthly Global Port Tracker report released today by the National Retail Federation and Hackett Associates.

“Retailers are starting to stock up in anticipation of a strong summer,” NRF Vice President for Supply Chain and Customs Policy Jonathan Gold said. “Tariff increases are on hold and progress is being reported in talks between the United States and China, so the imports we’re seeing now are driven primarily by expectations for consumer demand.” 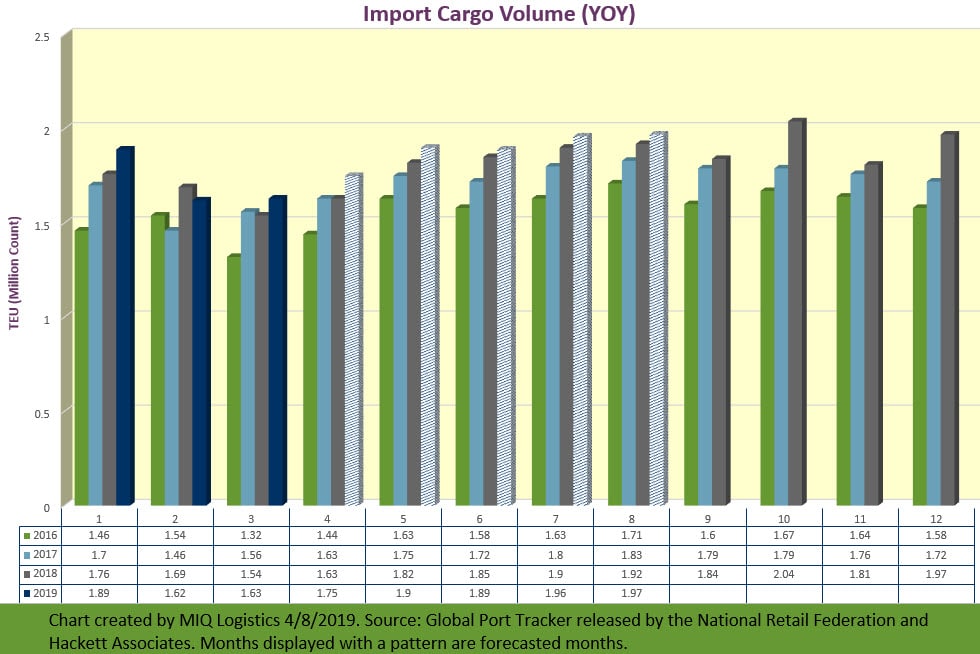 U.S. ports covered by Global Port Tracker handled 1.62 million Twenty-Foot Equivalent Units in February, the latest month for which after-the-fact numbers are available. That was down 14.3 percent from January and down 4 percent year-over-year. February is traditionally the slowest month of the year because of Lunar New Year factory shutdowns in Asia and the lull between retailers’ holiday and summer seasons. A TEU is one 20-foot-long cargo container or its equivalent.

“The U.S. consumer, while more cautious, has not stopped spending,” Hackett Associates Founder Ben Hackett said. “The inventory-to-sales ratio, however, is on the rise. Part of this can be attributed to the heavy front-loading of imports ahead of expected tariff increases that took place in 2018.”

U.S. tariffs of 10 percent on $200 billion worth of Chinese goods that took effect last September were scheduled to rise to 25 percent in March, but the increase was postponed by President Trump, citing progress in talks between Washington and Beijing. The tariff increase has been put on hold indefinitely while the negotiations continue.