With retail sales rising and President Trump saying he plans to both increase and broaden tariffs on goods from China, imports at the nation’s major retail container ports are expected to see unusually high levels the remainder of this spring and through the summer, according to the monthly Global Port Tracker report released today by the National Retail Federation and Hackett Associates.

“Much of this is driven by consumer demand but retailers are likely to resume stocking up merchandise before new tariffs can take effect,” NRF Vice President for Supply Chain and Customs Policy Jonathan Gold said. “Tariff increases and new tariffs will mean higher costs for U.S. businesses, higher prices for American consumers and lost jobs for many American workers. We encourage the administration to stay focused on a trade agreement, and we hope the negotiations will get back on track. It would be unfortunate to undermine the progress that has been made with more tit-for-tat tariffs that only punish Americans.” 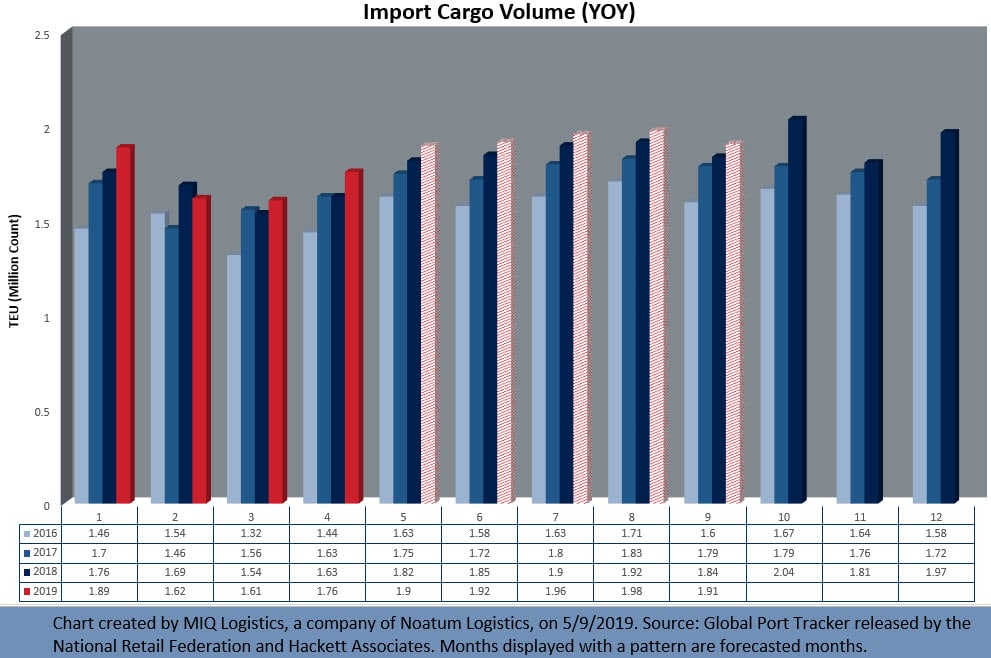 The rush to bring merchandise into the country that was seen through much of last year slowed down after Trump postponed a tariff hike from January to March and then put it on hold indefinitely as trade talks with China showed signs of progress. But Trump said this week that 10 percent tariffs on $200 billion worth of Chinese goods will rise to 25 percent on Friday, and that he plans to impose new 25 percent tariffs on most remaining Chinese goods at an unspecified date.

U.S. ports covered by Global Port Tracker handled 1.61 million Twenty-Foot Equivalent Units in March, the latest month for which after-the-fact numbers are available. That was down 0.6 percent from February but up 4.4 percent year-over-year. A TEU is one 20-foot-long cargo container or its equivalent.

“Consumption is facing the potential of increased tariffs on Chinese imports if President Trump’s tweets are anything to go by,” Hackett Associates Founder Ben Hackett said. “One can only hope that this is a simple negotiating tactic that will run out of steam.”