Growing imports at the nation’s major retail container ports set an all-time monthly record this summer, and 2017 is expected to reach a new yearly record, according to the monthly Global Port Tracker report released today by the National Retail Federation and Hackett Associates. 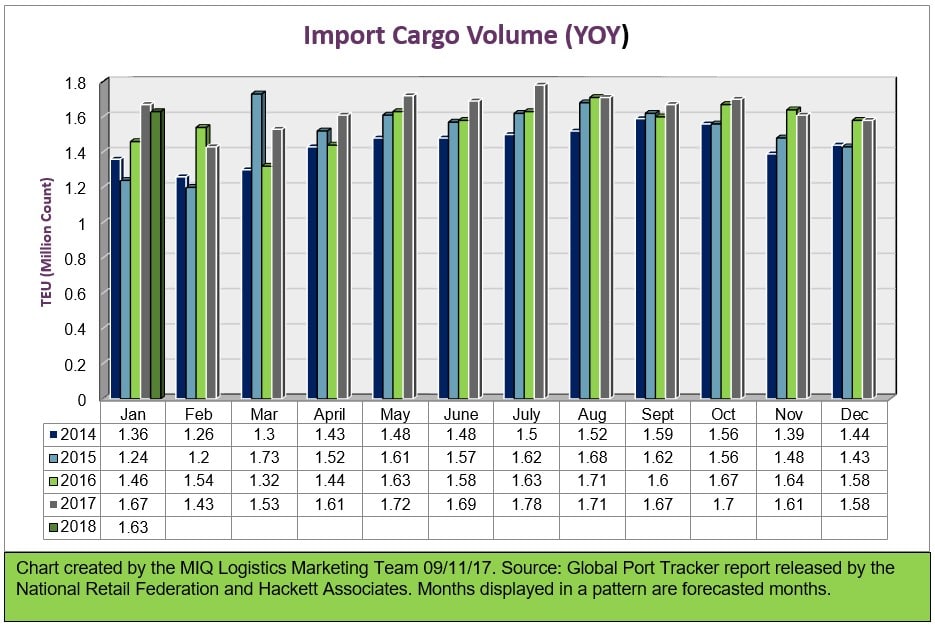 “Consumers are buying more, and retailers are scrambling to import more merchandise to keep up with the demand,” NRF Vice President for Supply Chain and Customs Policy Jonathan Gold said. “Docks have been busier than ever as ships unload cargo headed for store shelves, and that’s a good sign both for retail sales and the nation’s economy.”

Ports covered by Global Port Tracker handled 1.78 million Twenty-Foot Equivalent Units in July, the latest month for which after-the-fact numbers are available. That was up 5 percent from June and 9.2 percent from July 2016. It was the highest monthly volume recorded since NRF began tracking imports in 2000, beating the previous record of 1.73 million TEU in March 2015. A TEU is one 20-foot-long cargo container or its equivalent.

Global Port Tracker had previously forecast that the record would be 1.75 million TEU and would be set in August, but the record came in higher and sooner than expected. August’s actual volume was estimated at 1.71 million TEU, a drop of 0.1 percent from last year but still one of the five highest months on record.

The import numbers come as retail continues a long-term pattern of increased sales. Total retail sales have grown year-over-year every month since November 2009, and retail sales as calculated by NRF – excluding automobiles, gasoline stations and restaurants – have increased year-over-year in all but three months since the beginning of 2010. Retail employment has increased by 1.5 million jobs during the same period.