Imports at the nation’s major retail container ports have slowed down from their pre-holiday peak but remain at unusually high levels as retailers continue bringing in merchandise before tariffs increase in January, according to the monthly Global Port Tracker report released today by the National Retail Federation and Hackett Associates.

“Imports have usually dropped off significantly by this time of year but we’re still seeing numbers that could have set records in the past,” NRF Vice President for Supply Chain and Customs Policy Jonathan Gold said. “Part of this is driven by consumer demand in the strong economy but retailers also know that tariffs on the latest round of goods are set to more than double in just a few weeks. If there are shipments that can be moved up, it makes sense to do that before the price goes up.” 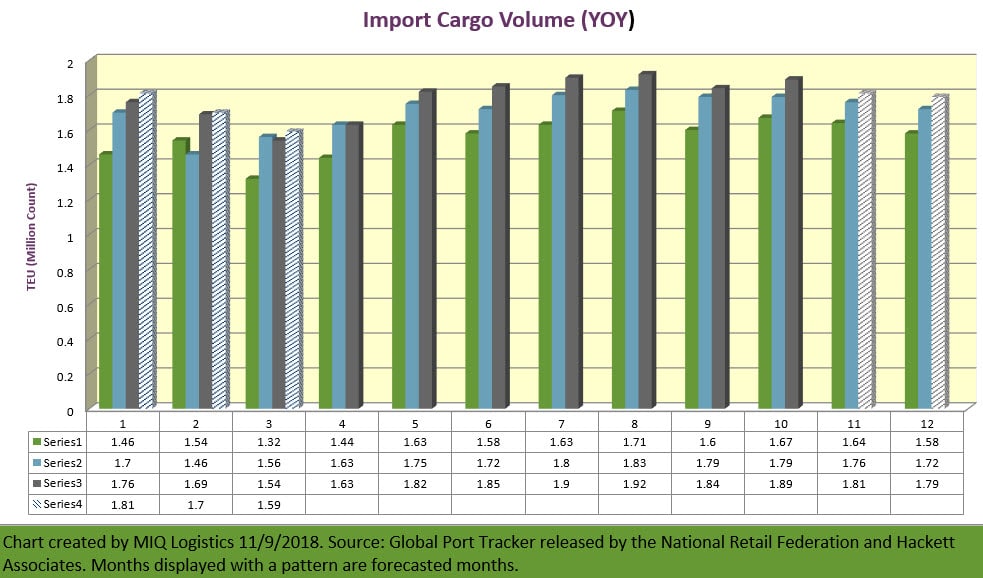 “President Trump’s trade war with China and the threat of even higher tariffs in 2019 have created a mini-boom in imports and businesses have rushed to bring goods into the country ahead of the tariffs,” Hackett Associates Founder Ben Hackett said. “We are clearly in a politically motivated trade environment.”

U.S. ports covered by Global Port Tracker handled 1.87 million Twenty-Foot Equivalent Units in September, the latest month for which after-the-fact numbers are available. That was down 1.3 percent from August but up 4.6 percent year-over-year. A TEU is one 20-foot-long cargo container or its equivalent.

Imports set a monthly record of 1.9 million TEU in July ahead of 10 percent tariffs on $200 billion in goods from China that took effect in September and are scheduled to rise to 25 percent in January. While not overall records, October, November and December’s numbers are each the highest on record for those months. Before this year, the highest monthly number on record was 1.83 million TEU set in August 2017.

While cargo numbers do not correlate directly with sales, the imports mirror this year’s strong retail sales. NRF forecast last week that 2018 holiday season retail sales – excluding automobiles, restaurants and gasoline stations – will increase between 4.3 percent and 4.8 percent over last year. Retail sales for all of 2018 are forecast to be up at least 4.5 percent over 2017.