Imports at the nation’s major retail container ports have dipped since peaks seen last fall but remain at higher-than-usual levels as a possible increase in tariffs on goods from China approaches in March, according to the monthly Global Port Tracker report released today by the National Retail Federation and Hackett Associates.

“With trade talks with China still unresolved, retailers appear to be bringing spring merchandise into the country early in case tariffs go up in March,” NRF Vice President for Supply Chain and Customs Policy Jonathan Gold said. “We are hopeful that the talks will succeed, but until the trade war is behind us, retailers need to do what they can to mitigate the higher prices that will inevitably come with tariffs.” 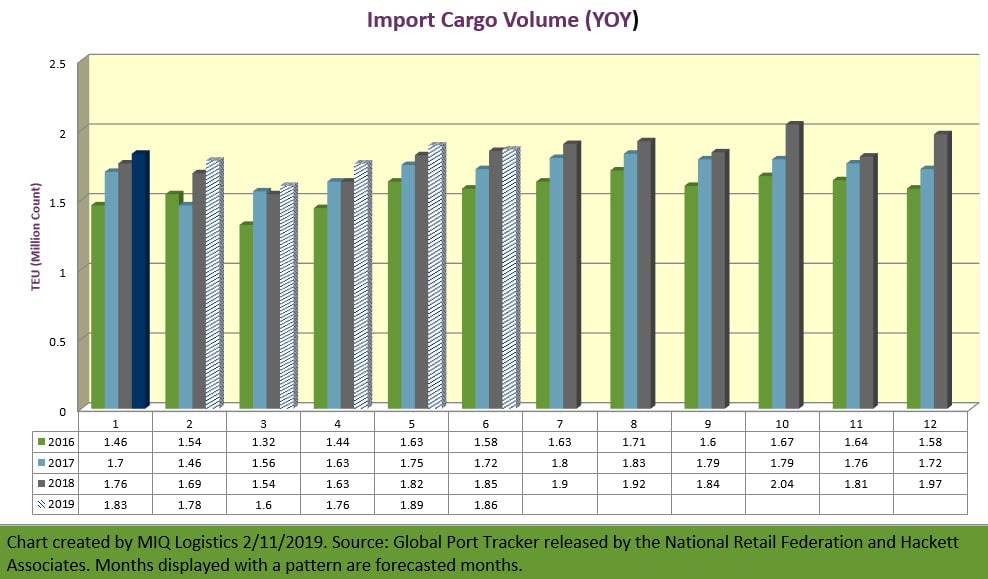 U.S. tariffs of 10 percent on $200 billion worth of Chinese goods that took effect last September are scheduled to increase to 25 percent on March 1 unless negotiations that began in December are successful.

U.S. ports covered by Global Port Tracker handled 1.97 million Twenty-Foot Equivalent Units in December, the latest month for which after-the-fact numbers are available. That was up 8.8 percent from November and 13.9 percent year-over-year. That brought 2018 to a record 21.8 million TEU, an increase of 6.2 percent over 2017’s previous record of 20.5 million TEU. A TEU is one 20-foot-long cargo container or its equivalent.

“U.S. containerized imports continue to be robust with retailers and other businesses trying to beat potential tariff increases in March,” Hackett Associates Founder Ben Hackett said. “The problem is that warehouses and storage facilities are running out of space.”