Retail Imports Surged in November Ahead of December Tariffs

Volume at the nation’s major container ports bumped up significantly in November as retailers imported merchandise ahead of new tariffs set to take effect this month, according to the Global Port Tracker report released today by the National Retail Federation and Hackett Associates. 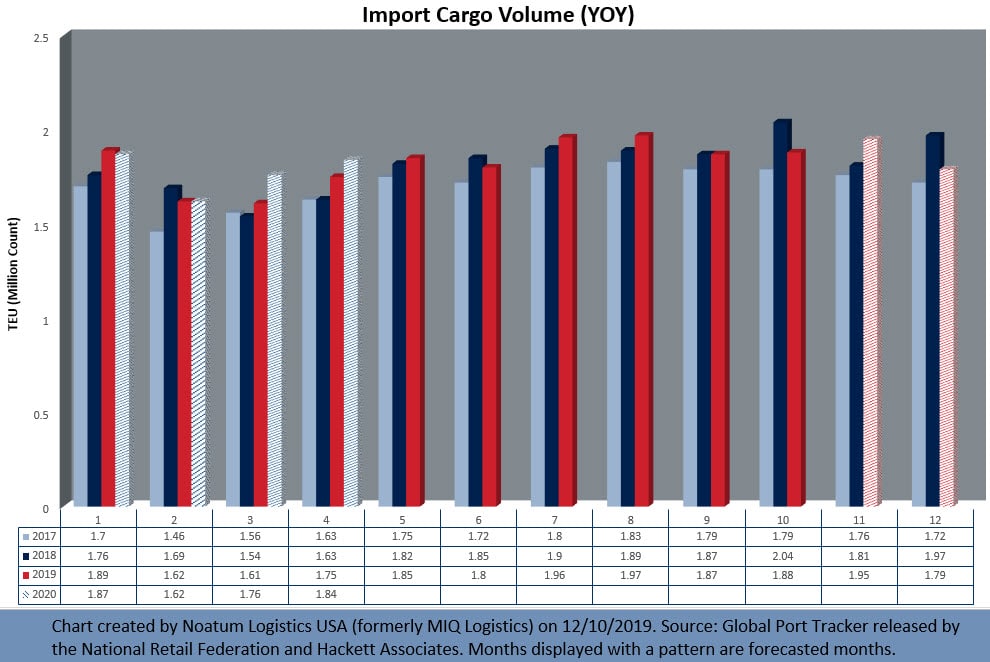 “At this point, holiday merchandise is already in the country, so the direct impact of new tariffs won’t be seen until the season is over,” NRF Vice President for Supply Chain and Customs Policy Jonathan Gold said. “Nonetheless, tariffs are bad for both consumer and business confidence, and we hope that the December tariffs will be canceled or postponed as a sign of good faith. We need a deal with China as soon as possible so we can bring an end to the trade war that has put a drag on the U.S. economy for far too long.”

President Trump announced a tentative agreement on a partial trade deal with China in October, but the measure has yet to be finalized and a new round of tariffs on consumer goods is still scheduled to take effect December 15.

“The U.S. consumer has shrugged off the slowdown in the economy,” Hackett Associates Founder Ben Hackett said. “Even though growth has slowed, low unemployment and higher wages have helped bolster purchases and, thereby, imports for consumer goods.”

Nonetheless, the trade war is “one of the factors that is impacting our forward-looking models as we continue to show slower long-term growth in import volumes,”  Hackett said.

U.S. ports covered by Global Port Tracker handled 1.88 million Twenty-Foot Equivalent Units in October, the latest month for which after-the-fact numbers are available. That was up 0.6 percent from September but down 7.5 percent from the all-time monthly record of 2 million TEU in October 2018. TEU is one 20-foot-long cargo container or its equivalent.

November jumped to an estimated at 1.95 million TEU, up 8 percent year-over-year as retailers frontloaded imports ahead of this month’s scheduled tariffs. That was the highest number since 1.97 million TEU in August, when retailers did the same ahead of tariffs that took effect in September. December is expected to drop to 1.79 million TEU both because of the new tariffs and the usual falloff in imports as the holiday season winds down. The projected December number is down 8.9 percent from high numbers seen a year ago during a similar pattern of bringing in merchandise ahead of new tariffs.