Retail Imports to Grow 4.5 Percent In the First Half of 2016

Import cargo volume at the nation’s major retail container ports is expected to decline year-over-year for the next few months but the first half of the year should still amount to a 4.5 percent increase compared with the same period last year, according to the monthly Global Port Tracker report released today by the National Retail Federation and Hackett Associates. 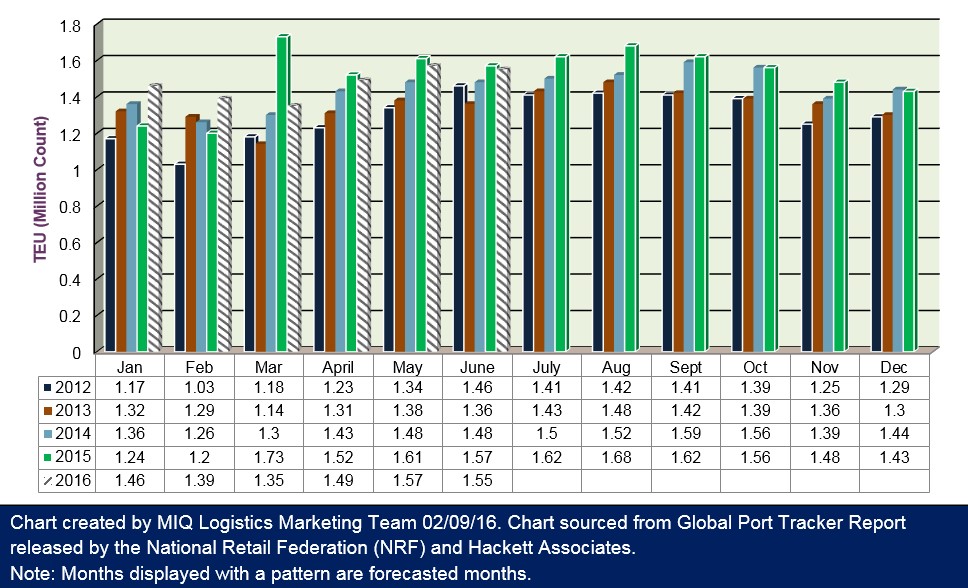 “Retailers are carefully managing their inventories but still need to stock up on seasonal goods for spring and summer,” NRF Vice President for Supply Chain and Customs Policy Jonathan Gold said. “Comparisons with last year are difficult because of the surge of cargo after problems at West Coast ports ended, but we think consumers will continue to increase their spending this year and retailers will be ready.”

Ports covered by Global Port Tracker handled 1.43 million Twenty-Foot Equivalent Units in December, the latest month for which after-the-fact numbers are available. With most holiday merchandise already in the country by that point, volume was down 3.4 percent from November and 0.8 percent from the year before. That brought 2015 to a total of 18.2 million TEU, up 5.3 percent from 2014. One TEU is one 20-foot-long cargo container or its equivalent.

With the global economy still struggling, Hackett Associates Founder Ben Hackett said government action in key nations could play a significant role in how 2016 plays out.

“Governments around the globe need to support economic policy that is pro-growth and avoid actions that get in the way of the business community,” Hackett said. “This is not the time, for example, for the U.S. Federal Reserve or other central banks to increase interest rates. What all the economies of the world need is stimulus to encourage consumer spending and to increase business expansion.”