Imports at the nation’s major retail container ports are expected to set record numbers this summer and fall even as the debate over trade and tariffs continues in Washington, according to the monthly Global Port Tracker report released today by the National Retail Federation and Hackett Associates.

“Consumers are buying more and that means retailers are importing more,” NRF Vice President for Supply Chain and Customs Policy Jonathan Gold said. “Imports continue to be the primary source of high-quality, mass-produced necessities at affordable prices and will be for the foreseeable future. If tariffs are imposed on consumer goods, that will only drive up prices for American families while doing little or nothing to punish those responsible for unfair trade practices.” 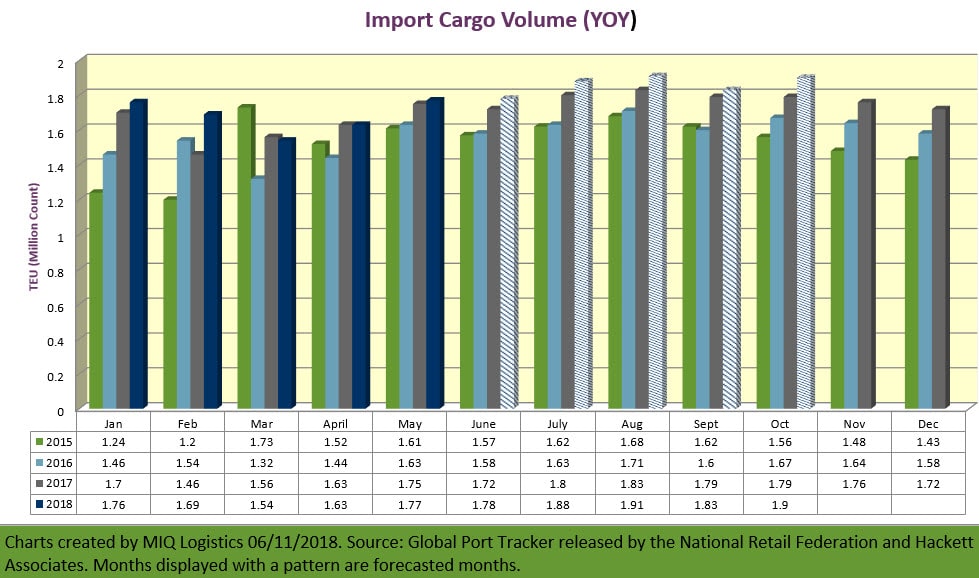 “Despite an environment where the U.S. administration is enacting measures that could well lead to a trade war with most of its Asian and European trading partners, we see imports continuing to grow,” Hackett Associates Founder Ben Hackett said, noting that manufacturers have seen increased orders that reflect solid consumer demand. “This suggests that neither industry nor consumers really believe that President Trump will push through with his proposed tariffs. Let’s hope that they are right.”

Ports covered by Global Port Tracker handled 1.63 million Twenty-Foot Equivalent Units in April, the latest month for which after-the-fact numbers are available. That was down 5.8 percent from March and up 0.3 percent year-over-year. A TEU is one 20-foot-long cargo container or its equivalent.

The numbers forecast for July, August and October would each beat the previous record of 1.83 million TEU imported during a single month, which was set in August 2017.