Retail Imports To Keep Growing Through The Summer

Imports at the nation’s major retail container ports should see steady increases through the summer and into the fall, according to the monthly Global Port Tracker report released today by the National Retail Federation and Hackett Associates. 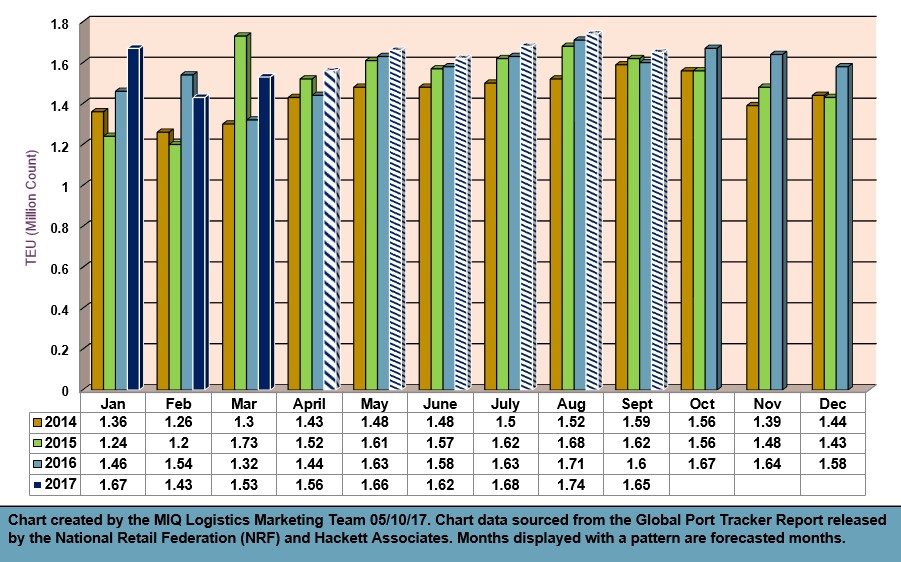 “Regardless of whether the sales come in their stores or through their websites, retailers see that consumers are buying more this year and they’re importing the goods needed to meet the demand,” NRF Vice President for Supply Chain and Customs Policy Jonathan Gold said. “With unemployment at its lowest level in a decade and the economy adding jobs, retailers expect shoppers to continue to increase their spending.”

“In the United States, the economy continues to slowly grow,” Hackett Associates Founder Ben Hackett said. “Gross domestic product was lower than expected in the first quarter but unemployment has dropped to levels not seen since before the Great Recession and, best of all, labor employment has increased dramatically. Our view, therefore, remains unchanged: There is nothing to worry about in the first half of the year, and growth is expected to continue in the second half even if it comes at a slower rate.”

Ports covered by Global Port Tracker handled 1.53 million Twenty-Foot Equivalent Units in March, the latest month for which after-the-fact numbers are available. That was up 6.8 percent from February, when many Asian factories closed for Lunar New Year, and up 15.8 percent from unusually low numbers the same month a year ago, when Lunar New Year came a week later than this year. One TEU is one 20-foot-long cargo container or its equivalent.