Retail Imports to See Final Tariff-Driven Surge of the Year

Imports at the nation’s major retail container ports are expected to see their final surge of the year this month ahead of new tariffs set to take effect in December, according to the Global Port Tracker report released today by the National Retail Federation and Hackett Associates. 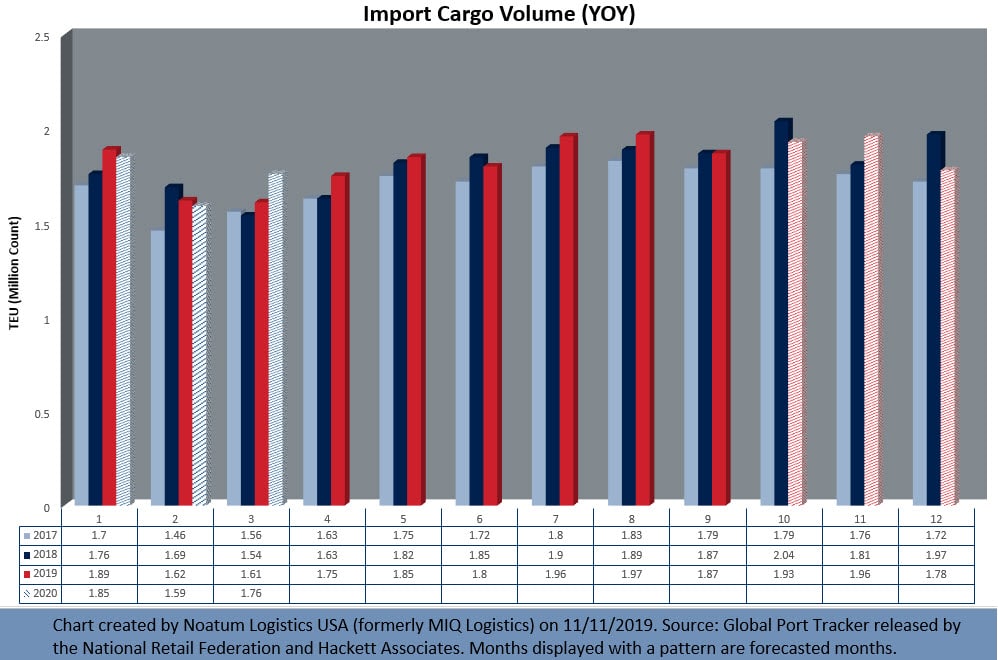 “Retailers are highly competitive, but the ability to compete has been challenging this year because of the uncertainty of the trade war and continued tariff escalation,” NRF Vice President for Supply Chain and Customs Policy Jonathan Gold said. “Retailers are encouraged by reports that China and the United States have agreed to remove at least some of the existing tariffs once a ‘phase one’ deal is signed. We are eager to see concrete evidence that the trade war is coming to an end with a final deal that removes all tariffs.”

President Trump announced tentative agreement on a partial trade deal with China last month, but officials are still working on the details and have not announced a date or location for the measure to be signed. An October tariff increase was canceled and news reports this week indicate that some tariffs could be removed, but there has been no word on a new round of tariffs on consumer goods currently scheduled to take effect December 15.

NRF will host a news conference next week in Washington where officials from the Port of Los Angeles and other groups will discuss the impact of the trade war.

“Industry planning is in a state of confusion with the on-again, off-again tariff increases and the widening of trade disputes,” Hackett Associates Founder Ben Hackett said. “Where is all of this leading us? As long as consumer spending remains relatively stable, economic growth – despite being weaker – will keep the country on track for the next year.”

U.S. ports covered by Global Port Tracker handled 1.87 million Twenty-Foot Equivalent Units in September, the latest month for which after-the-fact numbers are available. That was up 0.2 percent year-over-year but was down 4.7 percent from August, when imports saw their second-highest level on record – 1.97 million TEU – ahead of tariffs that took effect September 1. A TEU is one 20-foot-long cargo container or its equivalent.

October was estimated at 1.93 million, down 5.2 percent from last year’s record 2 million TEU. November is forecast at 1.96 million TEU, up 8.3 percent year-over-year and tying last December and this July for the third-highest number of containers in a single month. But imports are expected to fall to 1.78 million TEU in December, down 9.2 percent from near-record numbers last year ahead of scheduled tariffs that were later postponed. The expected drop from November will come as December’s tariffs take effect, but the month historically sees a falloff in imports because most holiday merchandise has already arrived by that point.