Retail Imports to See Surge Ahead of December Tariffs

Imports at the nation’s major retail container ports are expected to hit their highest level of the year again next month, just before more tariffs take effect in December, according to the Global Port Tracker report released today by the National Retail Federation and Hackett Associates. 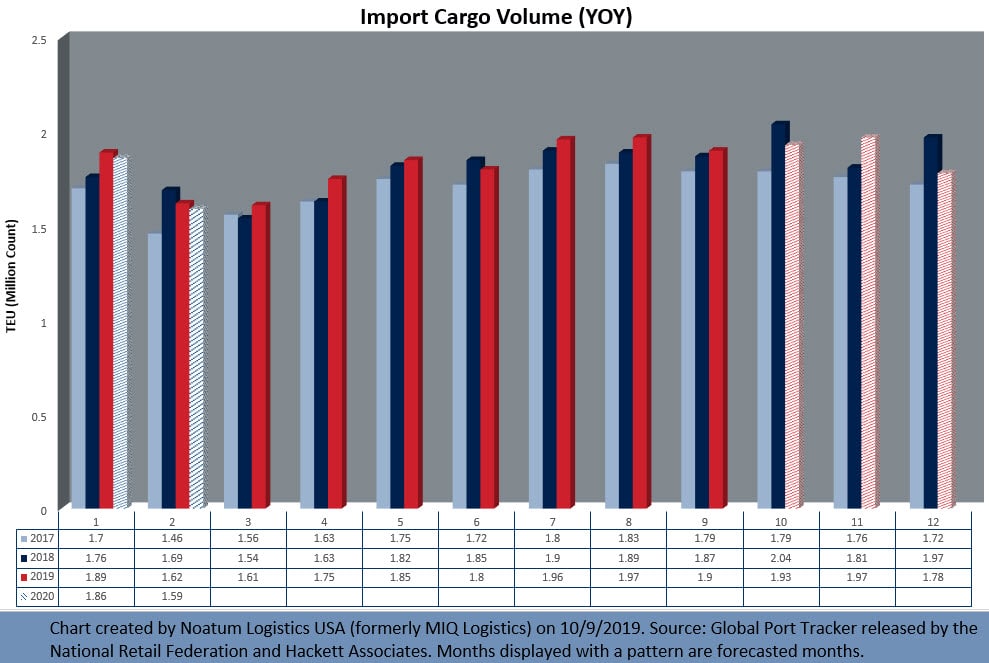 “This is the last chance to bring merchandise into the country before virtually everything the United States imports from China comes under tariffs,” NRF Vice President for Supply Chain and Customs Policy Jonathan Gold said. “Retailers are doing all they can to mitigate the impact of tariffs on their customers. The effect on prices will vary by retailer and product during the holiday season, but ultimately these taxes on America businesses and consumers will result in higher prices.”

New 15 percent tariffs on a wide range of consumer goods from China took effect at the beginning of September and are scheduled to be expanded to additional goods on December 15 – covering a total of about $300 billion in imports. In addition, 25 percent tariffs on $250 billion worth of imports already imposed over the past year are scheduled to increase to 30 percent on October 15.

“Let there be no doubt, U.S. trade policies and enforcement mechanisms have directly caused a global slowdown in economic growth,” Hackett Associates Founder Ben Hackett said. Nonetheless, imports are continuing to grow as retailers bring merchandise into the country ahead of tariffs. “The strength of retail consumption will push any meaningful slowdown in imports into next year, when the full impact of the tariff wars will be translated into a consumption tax felt by consumers.”

U.S. ports covered by Global Port Tracker handled 1.97 million Twenty-Foot Equivalent Units in August, the latest month for which after-the-fact numbers are available. That was up 0.2 percent from July and up 3.9 percent year-over-year, and was the second-highest number of containers imported during any month of the year after last October’s record of 2 million. A TEU is one 20-foot-long cargo container or its equivalent.

Numbers dipped in September as new tariffs took effect, coming in at an estimated 1.9 million TEU, up 1.6 percent year-over-year. October is forecast at 1.93 million, down 5.1 percent from last year’s record volume. November is forecast at 1.97 million TEU, which would be up 8.9 percent year-over-year and tie August as the second-highest number of containers in a single month. But imports will fall to 1.78 million TEU in December, down 9.3 percent year-over-year. The expected drop from November will come as December’s tariffs take effect, but the month historically sees a falloff in imports because most holiday merchandise has already arrived by that point.