Driven by increasing consumer demand and rising retail sales, imports at the nation’s major retail container ports are expected to set a new record this month even though new tariffs on goods from China just took effect, according to the monthly Global Port Tracker report released today by the National Retail Federation and Hackett Associates.

“Retailers cannot easily or quickly change their global supply chains, so imports from China and elsewhere are expected to continue to grow for the foreseeable future,” NRF Vice President for Supply Chain and Customs Policy Jonathan Gold said. “As tariffs begin to hit imported consumer goods or the parts and equipment needed to produce U.S. goods, these hidden taxes will mean higher prices for Americans rather than significant changes to international trade.” 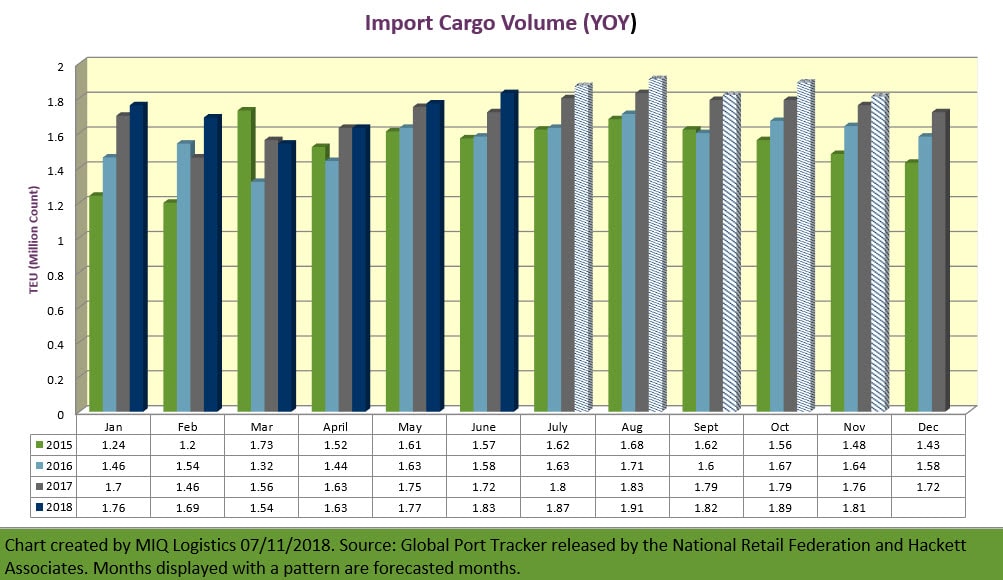 “July 6 was the beginning of the United States’ trade war,” Hackett Associates Founder Ben Hackett said, referring to U.S. tariffs on $34 billion in Chinese products that took effect on Friday. “There will be no winners, only losers – particularly consumers – as costs increase.”

Ports covered by Global Port Tracker handled 1.82 million Twenty-Foot Equivalent Units in May, the latest month for which after-the-fact numbers are available. That was up 11.6 percent from April as the annual wave of summer merchandise began to arrive and up 4.3 percent year-over-year. A TEU is one 20-foot-long cargo container or its equivalent.

The June number tied the record of 1.83 million TEU imported during a single month set in August 2017, and the forecast for July would break that record while August should set yet another record.

While cargo numbers do not correlate directly with sales, the record imports mirror strong results seen by retailers this spring and expectations of continued growth through the remainder of the year. Retail sales as calculated by NRF – excluding automobiles, restaurants and gasoline stations – were up 5.6 percent year-over-year in May and up 4.6 percent on a three-month moving average. NRF is forecasting that total 2018 sales will be up between 3.8 percent and 4.4 percent over 2017.