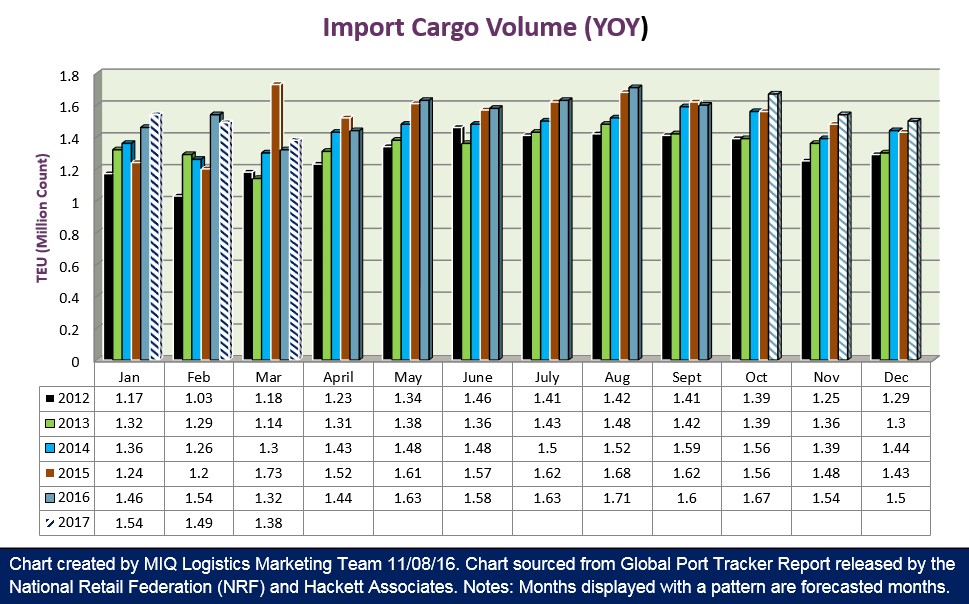 “Retailers are importing more during the holidays this year than last year and that can only mean one thing – they expect to sell more,” NRF Vice President for Supply Chain and Customs Policy Jonathan Gold said. “Most of the holiday merchandise is already here, but retailers are still restocking to be sure shoppers will have a broad and deep selection as they hit the stores over the next several weeks.”

Ports covered by Global Port Tracker handled 1.6 million Twenty-Foot Equivalent Units in September, the latest month for which after-the-fact numbers are available. That was down 6.6 percent from August, the busiest month of the year, and down 1.6 percent from September 2015. One TEU is one 20-foot-long cargo container or its equivalent.

Hackett Associates Founder Ben Hackett said U.S. imports are growing, but not as fast as in past years.

“Despite all the good economic news recently, we are faced with imports growing only about 2 percent this year,” Hackett said. “Whether that is merely part of the aftermath of the Hanjin bankruptcy or a sign of weakening demand is not yet clear. Unless there is a major disruption, however, growth should be modest but sustained during the first half of 2017.”