Import cargo volume at the nation’s major retail container ports is expected to be essentially unchanged from last year this month as stores bring in the last round of merchandise for the holiday season, according to the monthly Global Port Tracker report released today by the National Retail Federation and Hackett Associates. 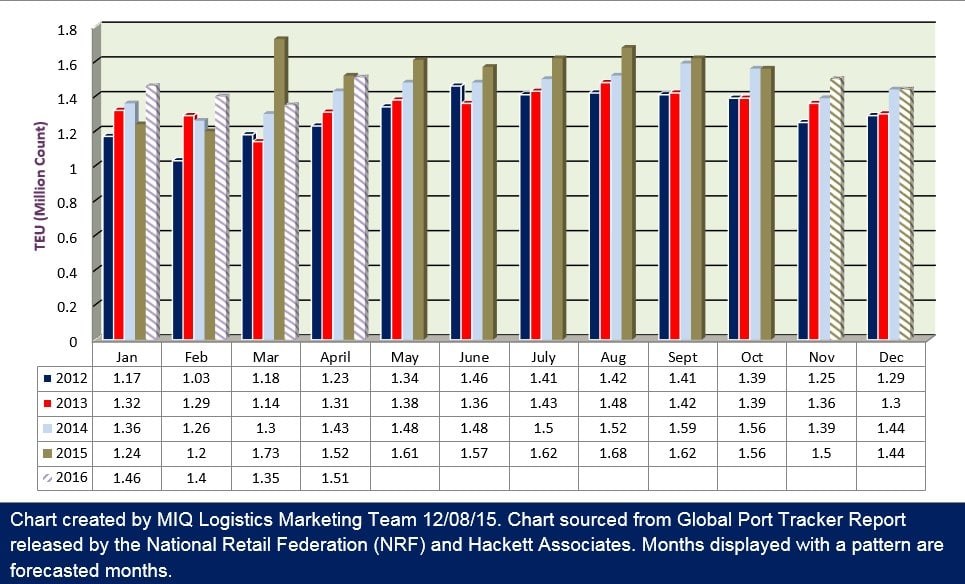 “The holiday season is well under way and merchants are doing the final balancing act of matching supply to demand,” NRF Vice President for Supply Chain and Customs Policy Jonathan Gold said. “Retailers went into the season with strong inventories that ensured consumers would have a good depth and breadth of selection, and that should hold true for the remainder of the season.”

The cargo report comes as NRF is forecasting a 3.7 percent increase in holiday sales this year over 2014. Cargo volume does not directly correlate with sales figures because each container counts the same regardless of the value of its content, but nonetheless provides a barometer of retailers’ expectations.
Ports covered by Global Port Tracker handled 1.56 million Twenty-Foot Equivalent Units in October, the latest month for which after-the-fact numbers are available. That was down 4.1 percent from September and down 0.1 percent from a year ago. One TEU is one 20-foot-long cargo container or its equivalent.

Hackett Associates Founder Ben Hackett said retailers are still working off excess inventory built up after the West Coast port situation and sustained by warm weather that has diminished the demand for winter clothing, but that consumers are buying.

“U.S. retail sales increased in October by the most in three months and consumer sentiment rose as well, but the inventory-to-sales ratio remained stubbornly high at levels not seen since the Great Recession in 2009,” Hackett said. “Personal savings increased, but on the flip side so did the use of credit cards.”