Retailers Still Stocking Up Ahead of Possible Tariffs, But More Slowly

Imports at the nation’s major retail container ports will remain at high levels this summer but are expected to grow only modestly compared with last year’s rush to bring merchandise into the country ahead of scheduled tariff increases, according to the monthly Global Port Tracker report released today by the National Retail Federation and Hackett Associates.

“Retailers still want to protect their customers against potential price increases that would come with any additional tariffs, but with the latest proposed tariffs on hold for now and warehouses bulging, there’s only so much they can do,” NRF Vice President for Supply Chain and Customs Policy Jonathan Gold said. “We will still see some near-record numbers this summer, but right now no one knows whether there will be additional tariffs or not. We hope the restarted negotiations with China will result in significant reforms rather than more tariffs that tax American companies and consumers.” 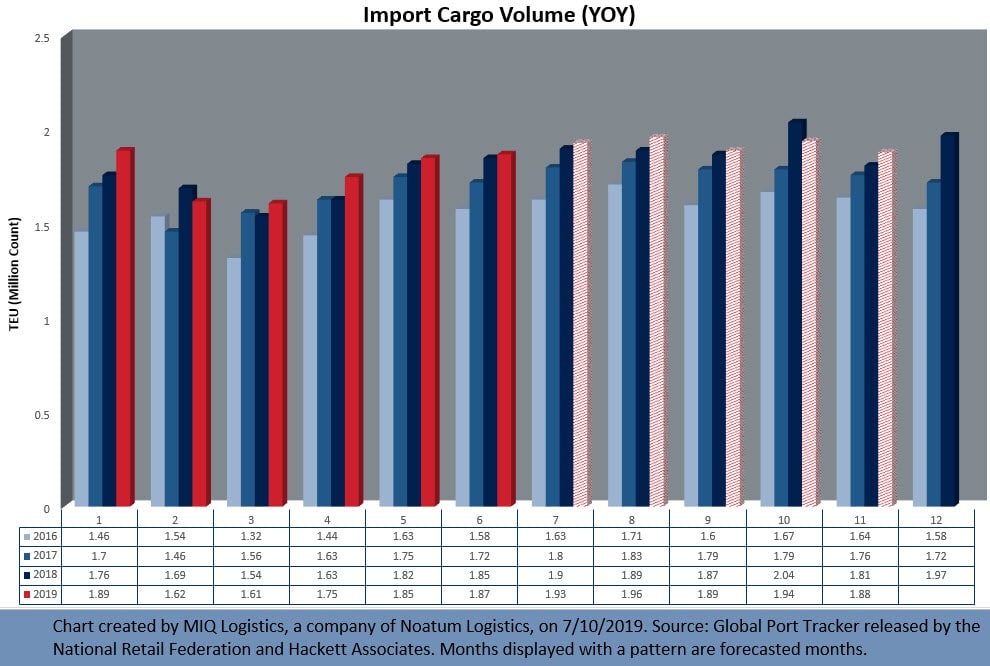 President Trump announced after meeting with China’s President Xi Jinping last month that he would hold off on tariffs on an additional $300 billion in Chinese goods while negotiations between the two countries resume. Coupled with tariffs imposed over the past year, the new round would tax almost all goods the United States imports from China.

“Imports of consumer goods continue to grow as importers purchase items in expectation of further increases in tariffs, the cost of which will be borne by the American consumer,” Hackett Associates Founder Ben Hackett said.

U.S. ports covered by Global Port Tracker handled 1.85 million Twenty-Foot Equivalent Units in May, the latest month for which after-the-fact numbers are available. That was up 6 percent from April and up 1.4 percent year-over-year. A TEU is one 20-foot-long cargo container or its equivalent.

The August number would equal the total seen last December just ahead of a scheduled January 1 tariff increase that was ultimately delayed until this spring and would be second only to the 2 million TEU record set last October. But the small year-over-year increases expected in the next few months compare with double-digit growth in multiple months last year as retailers rushed to import Chinese merchandise ahead of expected tariff increases.