With retail sales continuing to grow, imports at the nation’s major retail container ports are expected to remain strong this month after setting three new records this summer, according to the monthly Global Port Tracker report released today by the National Retail Federation and Hackett Associates.

“More tariffs could come any day, and retailers have been bringing in record amounts of merchandise ahead of that in order to mitigate the impact on their customers,” NRF Vice President for Supply Chain and Customs Policy Jonathan Gold said. “Retail sales are growing stronger than expected this year thanks to tax cuts and job creation, but tariffs are the wild card that threaten to throw away a significant portion of those benefits.” 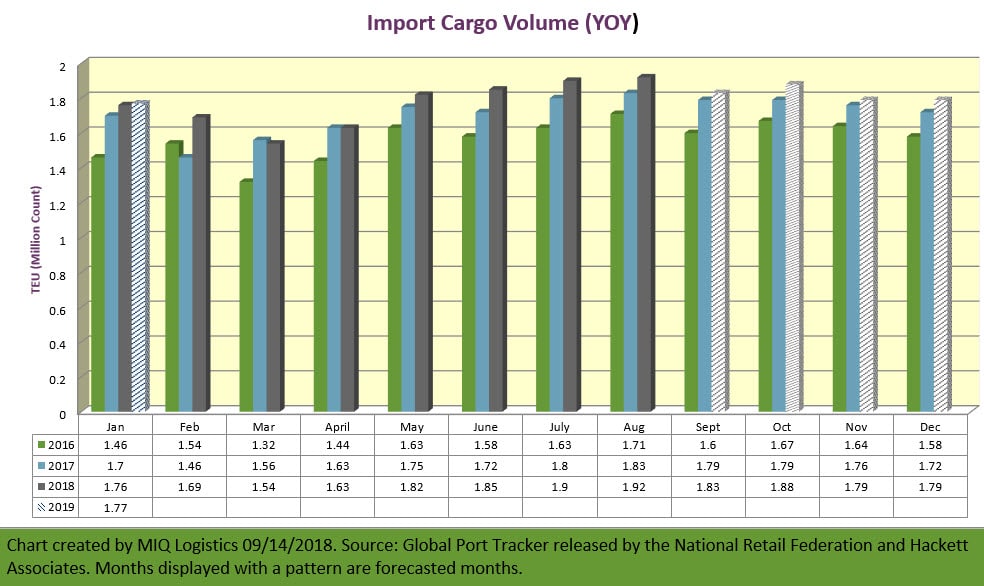 “The current boom in shipping can primarily be explained by importers’ response to the U.S. trade war with China,” Hackett Associates Founder Ben Hackett said. “Consumers appear to be spending money on goods ahead of the tariff price increases that will eventually come. But there could be a rocky road ahead as the impact of tariffs begins to be more fully felt.”

Ports covered by Global Port Tracker handled 1.9 million Twenty-Foot Equivalent Units in July, the latest month for which after-the-fact numbers are available. That was up 2.8 percent from June and up 5.6 percent year-over-year. A TEU is one 20-foot-long cargo container or its equivalent.

August was the third month in a row to set a new record for the number of containers imported during a single month, following July’s 1.9 million TEU and June’s 1.85 million TEU. The previous record of 1.83 million TEU was set in August 2017.

While cargo numbers do not correlate directly with sales, the record imports mirror strong spring and summer results expected to continue through the remainder of the year. Retail sales as calculated by NRF – excluding automobiles, restaurants and gasoline stations – were up 4.9 percent year-over-year in July and up 5 percent on a three-month moving average. NRF revised its annual spending forecast this summer to say 2018 sales are now expected to be up at least 4.5 percent over 2017 rather than the 3.8 to 4.4 percent previously forecast.