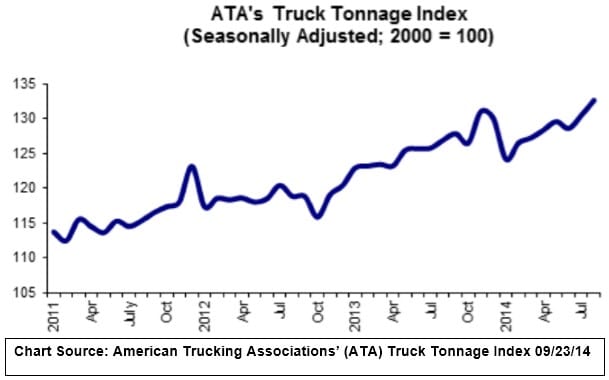 “Compared with August 2013, the SA index increased 4.5%, up from July’s 3.7% year-over-year gain. The latest year-over-year increase was the largest this year. Year-to-date, compared with the same period last year, tonnage is up 3.1%.”  “The not seasonally adjusted index, which represents the change in tonnage actually hauled by the fleets before any seasonal adjustment, equaled 133.5 in August which was 0.1% below the previous month (133.6).”

“After a strong July, factory production and housing starts fell in August on a month-to-month basis,” said ATA Chief Economist Bob Costello. “Truck tonnage actually did the opposite. Not only did it increase, it accelerated.”

“Costello stated that tonnage is up 3.1% over the last two months alone and has surged 6.8% since hitting a recent low in January.”  “I’m optimistic about the second half of the year for the economy, which means truck tonnage should do well too, he said.”

>> Click here to read the entire article from the American Trucking Associations’.