An atypical late in the year holiday season bump was evident, based on data issued this week in the most recent edition of the Port Tracker report issued by the National Retail Federation (NRF) and maritime consultancy Hackett Associates. 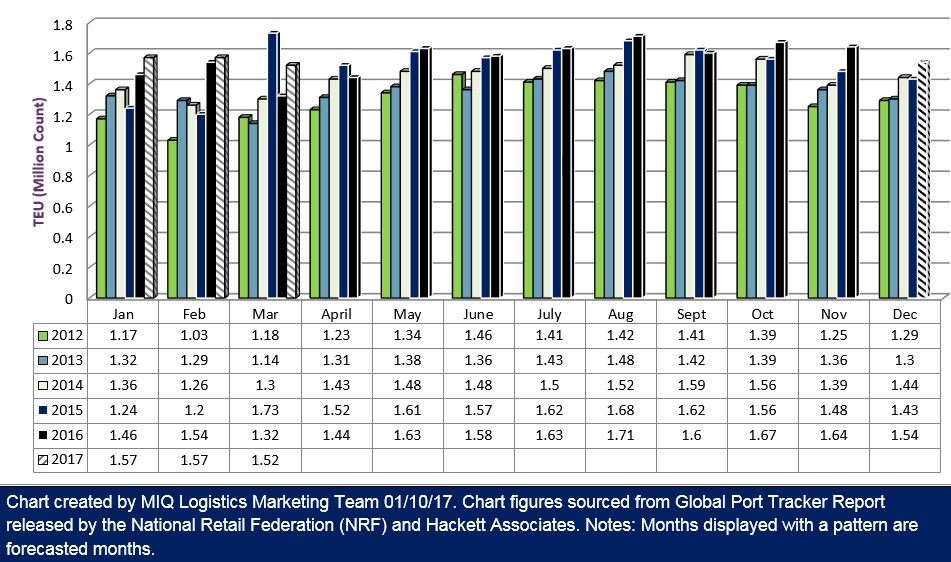 “We won’t see final sales numbers for a few more days, but import volume suggests that retailers had a strong holiday season,” NRF Vice President for Supply Chain and Customs Policy Jonathan Gold said. “Retailers don’t import merchandise unless they think they can sell it.”

For the month of November, the most recent month for which data is available, total volume dropped 1.6 percent from October, which is typically when most holiday imports have arrived, to 1.64 million Twenty-Foot Equivalent Units (TEU). This marks an 11.2 percent annual gain, too, easily surpassing a previous estimate of 3.2 percent annual growth.

The report also observed that for holiday sales, which are comprised of sales for November and December, are shaping up to eclipse the NRF’s previous forecast of $655.8 billion for a 3.6 percent annual increase, based on November’s 5 percent annual increase. December’s numbers will be issued at the end of this week on Friday.

And for all of 2016, the report said that total cargo volume is now estimated to come in at 18.8 million TEU for a 2.9 percent annual gain, ahead of a previous estimate of 2 percent.

Hackett Associates Founder Ben Hackett observed in the report that mixed economic signals remained front and center, even though volumes appear to have finished 2016 with strong momentum.

“Economic data is fickle by nature––it surged and falls and often surprises us with its transient information,” he wrote. “ So if we look at the fundamental drivers of trade over the last 12 months, we can be left confused. There is both optimism and pessimism and pointers showing growth as well as decline.”